God and the Cool Kids 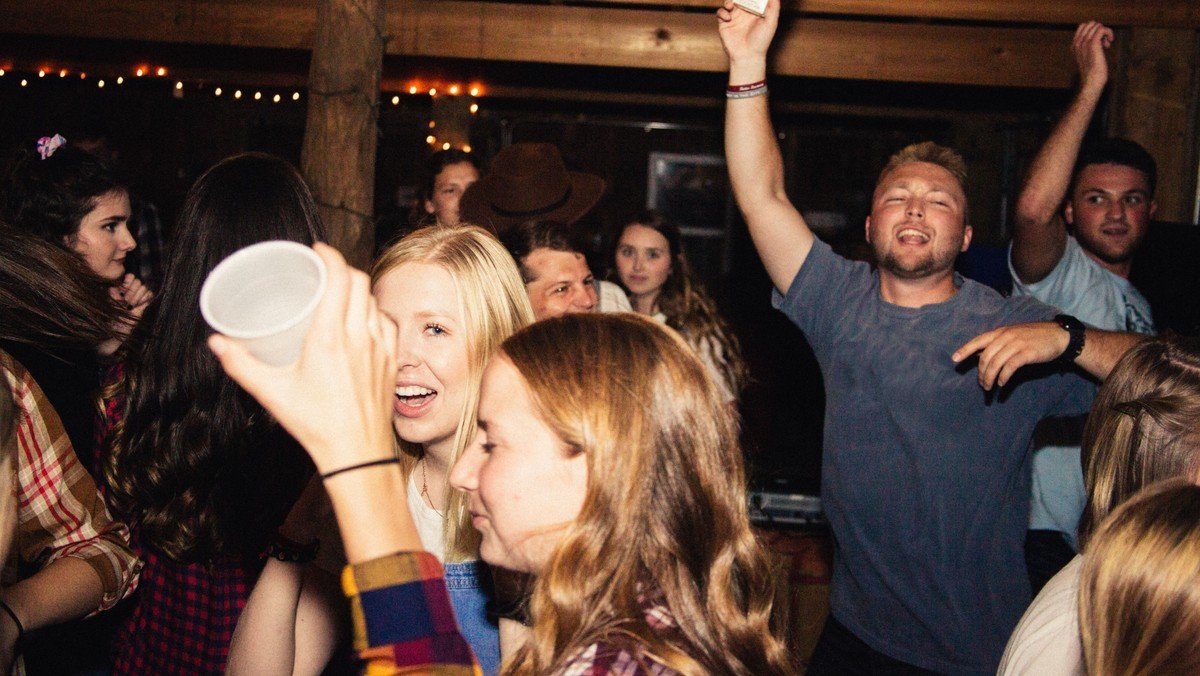 What if God threw a party and nobody came?

It’s hard to imagine a classic teen sitcom plot happening to a hapless Creator of the Universe, but here you have it. God is the kid you knew at school who surprises all the cool kids by handing out party invitations. Now she gets home from school on Friday, blows up all the balloons, streams all the streamers, bakes a cake from scratch, puts out the chips and dip and soda, and sits there waiting for the cool kids to show up.

So God gets on Snapchat and reaches out to all those cool kids. “Hey, remember the party? I thought you were going to come!” And one by one, each of those cool kids shares a video of what they’re doing. One has decided that an early start on the weekend’s homework will be more fun. Another is suddenly grounded for unspecified reasons. A third is attending a different party—with much cooler kids—and sends a clip of someone doing something their parents probably don’t know about. And those are just the nice cool kids. God also endures several occurrences of cyberbullying, each more severe than the last.

In other words, none of the invited guests really wants to be at God’s party.

OK, the “cool kids” metaphor was fun, but let’s hope it breaks down right about here. Jesus’ parable today says that some of the invited guests “seized [the king’s] slaves, mistreated them, and killed them.” In response, the “enraged” king sends out the military to kill all the invited guests and burn their city down. Bear in mind that the party is now ready to begin, no guests have arrived, and then we have this massacre as an interlude. What gives?

This leads us once again to the most important event in the Bible that is not specifically recorded anywhere in the Bible. Those of you who read the Gospel of Matthew with me in September should definitely know what it is. [Ask someone to unmute and say it!] That’s right: it’s the destruction of the Second Temple in the year 70.

Any North or South American knows that in 1492, Columbus sailed the ocean blue. That began a different and much longer-term destruction of the holy temple of indigenous people’s lives. Well, if you’re a Christian or a Jew, you should know the year 70 just as well, even if you were never great with dates in school. What’s that year again? [70!]

Jesus spoke this parable around the year 30, and forty years later the Roman emperor Vespasian sent troops to overrun Jerusalem and destroy the Jewish temple. But all of that happened before Matthew sat down to write his gospel. Matthew’s mixed community of Jews and Gentiles, to whom he was writing probably in the 80s, were trying to carve out this new identity of “Christian,” the offshoot of Judaism formerly known as “The Way.” The Jewish powers-that-be had colluded with the Romans to have Jesus executed. So Matthew dropped the destruction of Jerusalem into Jesus’ parable as a way to try to make sense of recent events.

Well, couldn’t the destruction of the temple be seen as God’s appropriate punishment for unbelievers? Sure, it could. But theologically, we are not required to agree with Matthew that all this death and destruction was divine punishment, or even that it was appropriate. Regardless, now that the massacre is over, Matthew returns to the party. The terror of the king’s wrath has subsided and we see a new determination in this party host: his number one priority is to fill this party full.

So just for fun, let’s return to our “cool kids” metaphor. God, the jilted party host, understands now that the cool kids will never like or respect her. Who needs them anyway? So she goes out into the street and starts grabbing all the kids she can find: age doesn’t matter, clothes don’t matter, culture and color and economics don’t matter, grades and academics don’t matter, history of delinquency doesn’t matter—nothing matters! All the kids are invited. “Come to the party!” And the kids begin streaming in: jocks and nerds and goths and burnouts and gamers and cheerleaders and theatre geeks and winners and losers and … and … everyone who will say yes. Everyone who will consent to come to the party.

This is what God’s party looks like. Have you ever had the guts to throw a party like that?

Your circle of community looks more like the Kingdom of God when it includes winners and losers … law-abiders and criminals … the landed rich and the homeless poor … many different colors and languages and genders and abilities and religions and socioeconomic backgrounds and political orientations and possibly an awful lot of drama. Real community is hard work. It demands our earnest humility and a genuine love of human beings, both generally and specifically.

Take Jesus’ disciples as Exhibit A: who were they? A handful of uneducated fishermen and a hated tax collector and a violent revolutionary and a prostitute and a fastidious Pharisee and wealthy widows. That was how the Church began. When it’s true to Jesus’ call, that’s how it continues still.

But wait—who’s this? Who is this one kid who has shown up at God’s party? Look at him there in the corner scoffing at the rest of the crowd, livestreaming the party with his phone to a bunch of his buddies somewhere else. Listen to his running commentary: “What a bunch of losers! Can you believe this God character, inviting them all here? They’re fashion disasters! And some of them are gay and some of them are from the other side of the tracks and some of them campaigned for the other guy. And this one sleeps around and that one won’t give it up and that guy has an online addiction he’s not telling anyone about. Who do they think they are, partying together? Be glad you’re not here! I wouldn’t be caught dead hanging out with them.”

Suddenly God is at his shoulder. “You wouldn’t be caught dead, eh?”

This being a typical teen sitcom, the loud music stops with the sound of a needle being dragged across a record. Every face in the place turns toward this confrontation.

God can be heard better now in the silence: “You say you wouldn’t be caught dead? … Well, your attitude tells me that you didn’t come dressed to party. And this is the eternal party. It’s the only true party there has ever been. So here’s your chance: are you going to let yourself be caught dead now?”

It’s not a rhetorical question. Yet the interloper is struck dumb. Is he too scornful to speak, or too insecure, or both? Maybe if he says something right now—an apology, an insult, a mumbled question, anything—something could change, open up, build to a new possibility. But he has nothing to say. He doesn’t want relationship—only the adulation of the cool kids. He can’t let anything in him die and be reborn.

“Well, I tried,” says God. And the formerly jilted party host ejects the party-pooper who thought he was too cool for the room. The music and dancing and merriment resume.

Did you get that this parable isn’t just about any old party? That it’s about something much bigger—the wedding banquet of Christ and all of humankind? This is what’s known as eschatology—the fulfillment of all of God’s plans.

The metaphor of an eternal party shows up more than once today. We first heard it from Isaiah, paired with the promise that God will wipe away everyone’s tears. There will be no more jilted party hosts and there will be no more losers, because everyone who’s anyone is invited. And “everyone who’s anyone” just means “everyone.” Except, of course, those who effectively exclude themselves by refusing to accept and enjoy the abundance of God’s love. There is no other party, but there’s still an outdoors, and you’re free to join that other guy out there to gnash your teeth about all the riffraff in God’s house.

But can you relax and enjoy the party?

Participation in God’s world of abundant love is a choice and a practice. It’s not something you wait to have happen to you; it’s a life you cultivate. It’s a wedding garment you decide to put on.

When Paul writes to the Philippians, “Do not worry about anything,” he’s not ignoring or avoiding the harsh realities of the world in favor of cheap optimism. Paul’s kind of hope doesn’t require times to get better first. Putting off hope until everything starts to get better doesn’t make sense, because hope only becomes possible inside the party. The expectation is not a sudden and complete lack of anxiety. Rather, relaxing into God’s love is something we practice every day, always being gentle with ourselves when we fail.

My call to you today is this: Come join the party. Invest your time and energy and money in community and abundant life. Even when things are falling apart around you, even when the anxieties won’t let you sleep, even when every effort seems meaningless, you can still decide to cast your lot with the rest of us who feel the same way but who have decided to trust that the eternal party host has invited us in.

The peace of God surpasses all understanding. Don’t expect to understand it. Just live in it. God’s peace guards our hearts and minds, which always feel like they’re in danger. But as Paul advises: “Keep on doing the things that you have learned and received and heard and seen.” While we live and breathe, our wearying work is not yet finished. But when we carry one another in community, we also get to spell each other. And so the party continues.