Thoughts on the Sermon on the Mount 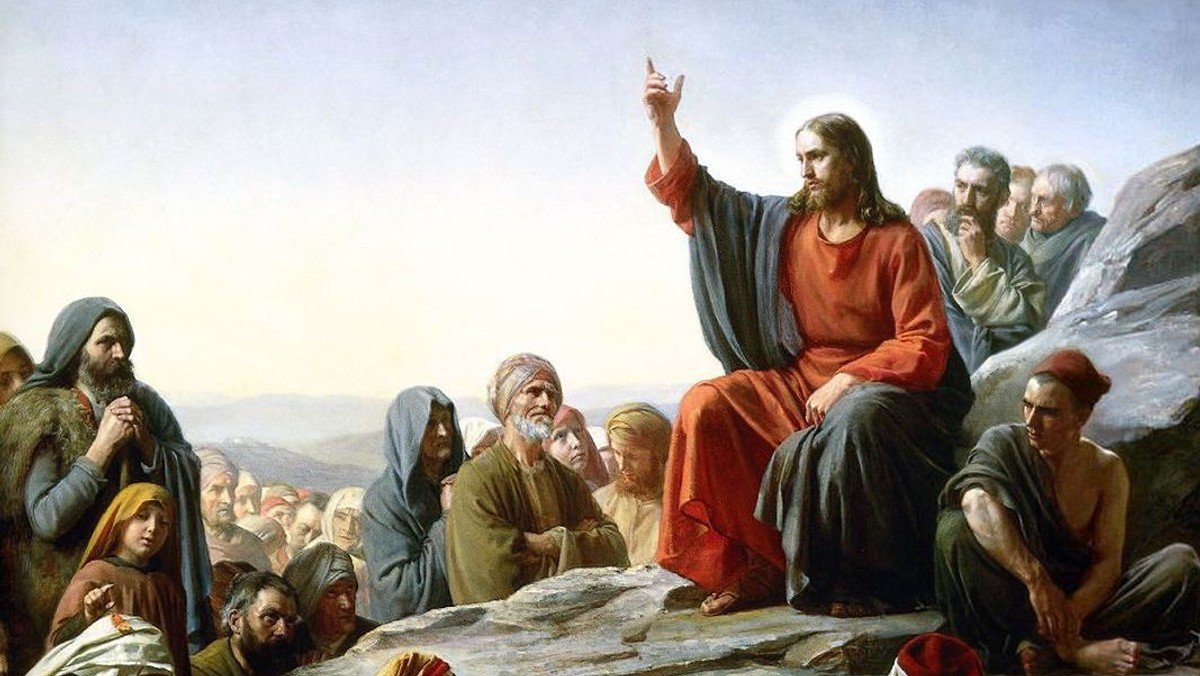 In Week 1 of our class on the Gospel of Matthew last week, we ran out of time and didn't get to talk about the Sermon on the Mount (Matthew 5-7), which is a real shame. So I promised the group I would write up some thoughts about it and share with you all. These thoughts follow. - Pastor Josh

In a 2006 speech before he was elected president, Barack Obama said that the Sermon on the Mount is “so radical that that it’s doubtful that our own Defense Department would survive its application.”

And in his 1992 song “Democracy,” Leonard Cohen sang of “the staggering account of the Sermon on the Mount, which I don’t pretend to understand at all.”

We read at the beginning of chapter 5 of Matthew’s gospel that Jesus “went up the mountain,” rather like Moses had done back in his day. Moses went to retrieve the Law from God and deliver it to the people. Jesus models this Moses-like behavior, but then he one-ups Moses. He teaches the people as the ultimate authority on what God is like—not just as a messenger or a mediator, but as the very face and voice of God.

Our first evidence of this is that Jesus feels free to dispense blessings. Look closely at those whom Jesus blesses, and you may wonder where the evidence is that this is true. The poor in spirit? Those who mourn? The meek, who keep being taken advantage of? The persecuted? Where are the blessings here? Perhaps true blessing is something other than what meets the eye.

In 5:12, Jesus speaks specifically to the persecuted and gives them reason to rejoice: “your reward is great in heaven.” This text has been misused by the powerful over the years. Some try to say, “We don’t need to rescue the poor from poverty, because God likes them that way, and they’ll have it much better when they die.” Just because Jesus says hardship is blessed doesn’t mean God approves of hardship, especially when we have opportunities to relieve it! God’s blessings must never be an excuse for our disregard or mistreatment of others.

In church we usually hear the Sermon on the Mount in bite-sized chunks, dispensed over the course of many weeks in our lectionary cycle. There’s something different about reading the whole thing in one sitting. For one thing, I became aware that when Jesus says, “You are the salt of the earth,” he’s speaking specifically to the masses of people with limited ability to change their circumstances. “You are the light of the world!” he tells them. That would be shocking news to those with a lot of money and influence. Here are the people who matter: the smelly hoi polloi. These are God’s beloved.

Next, Jesus places his words in the context of Mosaic law. This is of special concern to Matthew; there’s no parallel in the other gospels. We’ve talked about how Matthew is “the most Jewish” of the gospels, probably written to a community dominated by Jewish Christians. So Matthew makes sure to report Jesus saying, “I have come not to abolish the law but to fulfill it.” This isn’t some newfangled religion; it’s a re-centering of Judaism, a clarification of what Jesus felt had become blurry. Jesus warns them, “Unless your righteousness exceeds that of the scribes and Pharisees, you will never enter the kingdom of heaven.” Please note that Jesus does not explain at this point either how this righteousness is secured or what specifically he means by “the kingdom of heaven,” about which he will later speak in parables.

Examples of this clarification follow in abundance and in a formula: “You have heard it said … but I say to you …” In each case Jesus is not contradicting the law, but fine-tuning its application.

“Be perfect,” says Jesus at the conclusion of chapter 5, which basically means, “Be a whole, mature person.”

In chapter 6, Jesus goes on to give more specific ramifications of this kingdom-living life. It revolves around humility. We are not to call attention to ourselves, our prayer lives, or the gifts we give; we are just to pray, to give, and move on. It is in this context that Jesus teaches the people a very simple prayer, the Lord’s Prayer—a brief, intimate moment of connecting with God. This prayer reminds us that we cannot participate in a kingdom of forgiveness unless we, too, develop the habit of forgiveness.

Jesus then turns to the topic of money, one of his favorite topics. He urges his hearers never to hoard or to allow money to gain any undue influence over our behavior. Then, as if anticipating the response “but we need money to survive,” Jesus says in essence, “Of course you do. But you need God more.” This kingdom life, Jesus says, will provide for your needs in a communal way, without you having to track every penny of your own. When you give yourself fully to your fellow humans in love, you’ll all take care of one another. It’s a non-anxious kind of life.

But it takes your full participation, Jesus continues in chapter 7. Kingdom life means continually examining yourself and repenting of that which draws you away from the way of love. You can’t expect to live in God’s kingdom while being hypocritical, because then the whole thing falls apart. But if you are earnest in your intentions and your actions, and if you’re willing to change course when you’re wrong, there’s no need to worry. God loves you, right? If you believe this, then why would you think God would treat you cruelly? In the same way, we must love one another—and this, Jesus insists, is what the law is all about, and it’s all that the prophets ever cared about.

This isn’t an easy way to live, Jesus clarifies. But do your best (“enter through the narrow gate”). Finding the balance required for such a life is something most people fail at. A lot of people think they’re winning at this life thing, checking off the boxes of piety, shoring up their little rings of safety. But if they’re not loving one another—which is the will of God—then there’s no place for them in the kingdom.

So, Jesus concludes, be like the wise man who built his house on rock instead of sand. The way of wisdom takes foresight and planning, and then it takes practice. You don’t get to throw it together hurriedly and expect it not to come crashing down.

These three chapters, taken as a whole, are a remarkable window into the one who we Christians believe speaks with God’s voice.

It is also instructive to compare Jesus’ words here to those in Luke 6:17-49, the parallel passage commonly called the “Sermon on the Plain” because it is set in a different place. Luke’s version is briefer. Perhaps the most notable difference is that Luke is very concerned about addressing economic inequities. Luke also begins with Jesus’ blessings, but instead of “the poor in spirit,” he says, “the poor.” Luke’s blessings are also followed by a whole series of “woes” against the rich and comfortable.

In the Sermon the Mount (and the Plain), Jesus raises the bar. He’s all in with Judaism. But the call to Abraham was always intended to generate blessings for all the peoples of the earth. Most especially, these blessings are for those who know how much they need God’s care, guidance, and protection. Perhaps those who have been on the losing side of things are those who most for God’s kingdom and will wake up every day with joy to participate in it.

And when they do, they’ll find that their standard of love and reconciliation, while it can never rise to God’s level, is nevertheless certain to be bolstered by God’s grace. From this act of divine self-giving comes the very righteousness that they could never achieve on their own. When that happens, the result is—well, heaven.