The Weak and the Strong 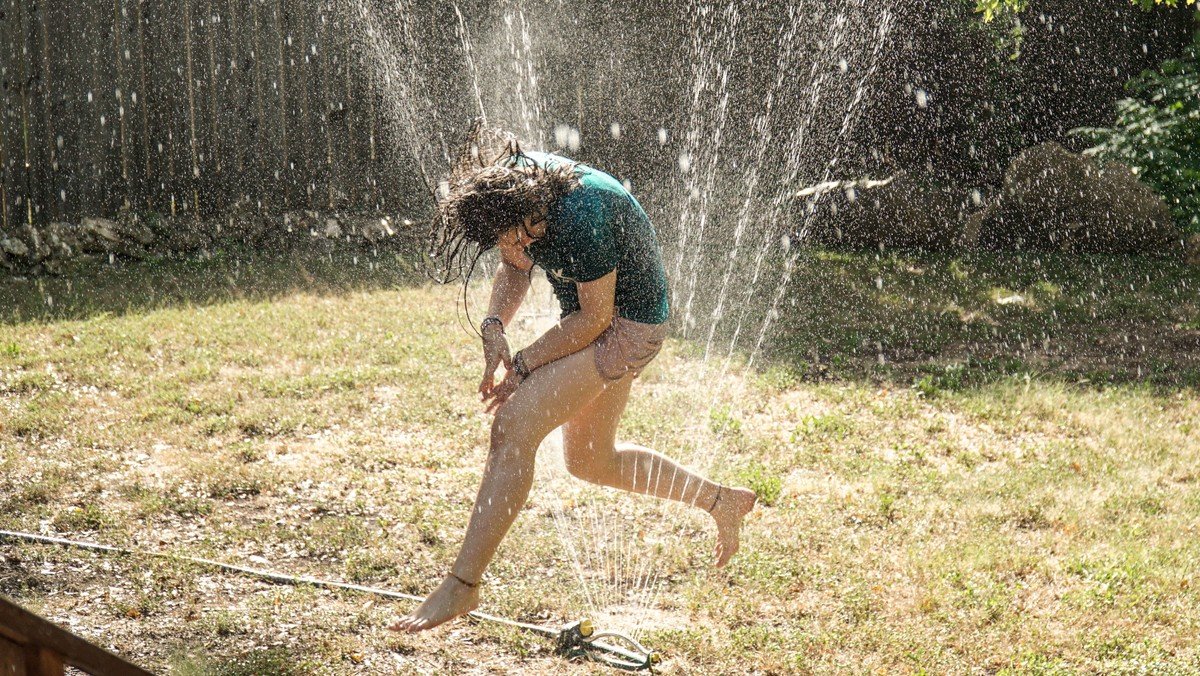 I want to tell you a story that has not, to my knowledge, ever actually happened. Let’s imagine for a moment that your neighbor turned on a lawn sprinkler, invited all the local kids to play in it, and then informed the kids’ parents that their children had now been baptized into this neighbor’s personal religion. Did a baptism occur just because this person said so? Of course not.

Yet there might be some parents who aren’t going to write off this event as spiritual kookery. Some may actually worry that something supernatural has occurred against their will and that of their children. Will God be angry with them for allowing such a thing to happen? Can some other supernatural being now lay claim to their children? And if so, how will they be able to undo the effects?

These anxious parents are the people Paul would characterize as “weak in faith”—that is, they feel that it’s up to them to make sure that they and their children stay on God’s good side, rather than just trusting that God loves them.

We might call such folks the spiritual descendants of Joseph’s brothers. They had sold Joseph into slavery in Egypt—and that seems unforgivable, doesn’t it? Yet Joseph does forgive them of this horrible sin. Still, they doubt. They need additional reassurance that Joseph won’t revoke his forgiveness. And Joseph offers that reassurance by casting the whole sorry story as a part of God’s grand story: “Am I in the place of God? … Even though you intended to do harm to me, God intended it for good.” In other words, God’s job is not to prevent us from doing bad things to others, but to help bring whatever good is possible out of the situation. In Egypt, the descendants of Jacob’s sons will become the Hebrew people, God’s chosen ones.

In Paul’s time, the issue is not lawn sprinklers or brotherly betrayal, but meat sacrificed to idols. It was a regular part of Roman worship to offer meat in sacrifice to their gods, and then to sell it in the marketplaces. To consume such meat was to participate in the worship of these gods. Furthermore, there was often no way to tell whether the meat you were buying had at some point been sacrificed to a Roman god. Those whom Paul calls “strong” Christians trusted that God, the creator of the universe, would understand this situation and would not hold it against Christians for eating such meat. But for Paul’s “weak” Christians, the thought of participating in idol worship, even by accident, opened them up to all sorts of spiritual danger, so they thought it best to become vegetarians and avoid the whole mess completely.

It got tricky when these two groups of Christians met. Those who were more educated, more philosophically astute, perhaps, knew perfectly well that no false god actually exists. Even if there are invisible spiritual forces out there other than God, they are subordinate to and subject to the God who created all things. To worship them would be misplaced devotion. But one cannot accidentally worship a false god, any more than one can accidentally be baptized.

The other group, however, is not wrong to be afraid of such things. If their conscience tells them to be wary of supernatural beings that might divert them from their devotion to the one God, should they be told that their conscience is wrong? This group would rather play it safe. The “weak” Christians are not in essence weak people, even if they have much to learn from the “strong” Christians. What’s important to Paul is that the “strong” Christians also have something to learn from the “weak” ones—something about how to love others. The answer is not to get impatient and snippy with them, but simply to love them and to be considerate of their doubts and fears. And that requires a change of behavior.

It’s hard to characterize these two groups impartially, because to our ears, the terms “strong” and “weak” sound laden with judgment. I think Paul was writing primarily to the “strong” group, seeing as he didn’t seem to worry about offending anyone. And it’s to the “strong” Christians that he directs his primary message: don’t be a stumbling block to people who know less than you do. Would you tell a young child something unimaginative about Santa Claus? Would you tell a teenager in love, “You’re just going to break up in a couple months anyway”?

When faith in God is involved, the stakes are even higher, because the things we say and do have a real effect on what people believe God is like—the image of God that gives meaning and direction to their lives. If someone says to you, “I believe in God,” they haven’t told you much. Their image of God could be loving and generous or capricious and cruel. Or a troubling mix of both! As we turn to the gospel reading, then, think about the image of God shown in the parable of the servant whose debt is forgiven.

I’ll retell the parable briefly. A king wants to settle his accounts. One of his servants owes him a lot of money. To help us keep the characters straight, let’s name the servant after one of Joseph’s more obscure brothers. Let’s call him Issachar.

How much money does Issachar owe the king, exactly? Recalculating the numbers given here into today’s money, I figure that he owes his master … oh, ten million dollars. (!) And let’s leave aside the mysterious question of how Issachar came to wind up this badly in debt. The point is that the king wants his money back now. Issachar says, “I can’t pay now, but I promise I will pay you back someday.” This will never be possible, of course. But, out of pity for him, the king not only releases Issachar but cancels the entire debt.

I imagine Issachar is somewhat rattled by this experience. He’s just been given an incredible gift, but he doesn’t know how to receive it. Maybe Issachar feels humiliated—he’s a good, honest man, and he doesn’t want to be a charity case. What will his neighbors think? Or, like Joseph’s brothers, maybe Issachar doubts that his debt is really forgiven. So he figures he’d better start scraping together as much money as he can before the king asks him for payment again.

At any rate, the first thing Issachar does is find some poor schlub—we’ll call him Asher—who owes Issachar a hundred bucks. Issachar demands immediate payment. But Asher doesn’t have $100, so Issachar calls the police and has Asher thrown in jail.

Now, let’s be clear: Issachar hasn’t done anything illegal. Asher owed him $100, and Asher couldn’t pay, so Asher went to jail. But when the king finds out, he angrily calls on Issachar to explain himself. What is Issachar’s crime? Simply this: his failure to trust that the king has, indeed, forgiven the debt.

Issachar’s image of the king is that forgiveness is only an illusion. As a result, he fails to change his behavior in relation to all the other people in his life. So the king reinstates the debt. Issachar has decided he prefers the torture of eternal debt to the torture of even having to play the game of forgiveness.

If we live like Issachar, what might that mean we think God is like? God is a strong king, hoarding all the riches. God keeps strict accounts. God may say your debt is forgiven, but you’d better h=feather your own nest in case God changes the divine mind. Everything is transactional: do good, and God will reward you. Do evil, and God will punish you accordingly. There is no forgiveness; the requirements of the law reign supreme. Except where you can get away with stuff and not get caught.

But if we look at the actions of the king in the parable, what might we learn about God? God is powerful, yes. God holds all the cards. But God is wasteful, even profligate, with what is God’s own. How costly is it to God to forgive our debts? We can’t possibly know. We can only accept God’s forgiveness with joy—and spread that joy to others. Or we can reject that forgiveness and stick to our small-minded, transactional systems.

In Jesus’ parable, Issachar may seem very weak to us. But the story is there to hold us accountable. Are we ready to scorn Issachar for his failure to learn and grow? Would we act the same way toward the Christians in the Roman Empire who are so afraid to eat meat? What about today, in a country torn apart by race and politics and the very notion of what good leadership looks like? How often do you find yourself thinking, “If these people just knew this one thing, they’d change their minds, change their behavior, and everybody would get along!” Apparently it’s not that easy. And our scorn isn’t doing anyone any good.

Jesus tells his disciples to forgive someone who has wronged them 77 times—or, to translate the Greek another way, seventy times seven, and that means forever. In other words, we’re never totally done with anybody. Not in God’s world.

Yes, sometimes we may find it crucial for our own safety to put distance between us and those who would harm us. We may even have to decide not to engage with somebody ever again. But Jesus would have us hold a place in our hearts for just a tiny little asterisk—“but yet”—a shred of a thought that maybe, just maybe, forgiveness is possible even for those who have done the worst things we can imagine. They may truly be weak, foolish, shortsighted … just plain mean. But they belong in God’s world. Everyone does. And God wants growth and maturity for them, too, whether they’ve destroyed another person’s life or whether they just have unenlightened ideas about meat and lawn sprinklers.

Guess what? That means we belong as well. No matter what we’ve done, Jesus’ standard of forgiveness is also for us. Our dignity in God’s eyes is secure. Will you allow yourself to be changed by this God? To be healed and transformed and then to start treating other people in your life in a similar way? To love one another as God has loved us?