What If We're Not the Good Guys? 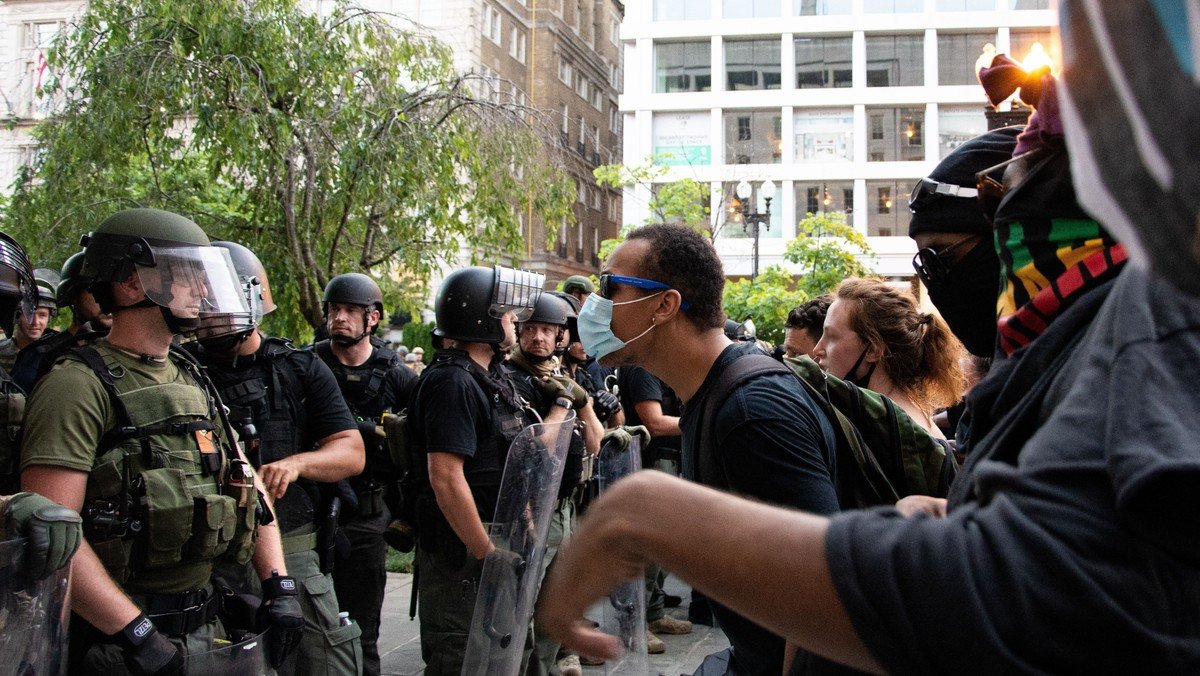 Almighty and eternal God, so draw our hearts to you, so guide our minds, so fill our imaginations, so control our wills, that we may be wholly yours, utterly dedicated to you; and then use us, we pray, as you will, and always to your glory and the welfare of your people; through our Lord and Savior Jesus Christ. Amen.

In our first reading today, two prophets are squaring off like they’re guests on a TV news program. Let’s tune in, shall we?

First there’s Hananiah. He acknowledges that, yes, the Babylonians have overrun Jerusalem and carted all the most important people away, including King Jehoiachin, whose father had tried to rebel against the Babylonians and failed. And yes, the Babylonians have set up the former king’s brother Zedekiah as a puppet king, whom they keep in line with threats and intimidation. The political situation looks really bad for the Jews right now. And with no royal family to turn to, the prophets are the only ones left to speak for the people. But really, things aren’t so bad.

Hananiah’s rival prophet Jeremiah sits across the table looking kind of odd. This is because since the moment the Babylonians installed the puppet king, Jeremiah’s been wearing a wooden yoke on his neck—you know, the kind you fit onto oxen. Dramatic figure that he is, Jeremiah is demonstrating to the people that there’s no point thinking they’re going to get their country back anytime soon. He urges them not to rise up in rebellion, but to settle in and serve the Babylonians without making a fuss. This is, by definition, an act of treason.

Hananiah, on the other hand, has free shoulders, and his hands move animatedly as he speaks honeyed words. He announces, “God has spoken to me! And God says, ‘Don’t worry … be happy. Have a little more patience. Two years from now, the Babylonians will just disappear, and King Jehoiachin will be back on the throne. So hunker down for just a little while, and then everything will be OK.’” There is no evidence for Hananiah’s claims.

The passage we heard today is Jeremiah’s response to Hananiah: in essence, “Gosh, I hope you’re right. I’d love to think that the foreign power that has conquered us—which they managed to do because of our own nation’s terrible leadership, by the way—will just magically go away. I know it’s within God’s power to make that happen. But look back at the whole history of prophets. We usually tell people what they don’t want to hear. And all along, fake prophets have gained popularity by telling people what they do want to hear. Well, you’re giving people really happy news. But we won’t know you’re a real prophet until it actually happens.”

In that moment, Hananiah rises up in a rage, yanks the yoke from Jeremiah’s neck, and smashes it. He shouts, “God will break the yoke of the Babylonians just like this!” And the TV ratings go through the roof.

Jeremiah makes no fuss about this scene. But a little bit later he sends a message to Hananiah: “Listen, dude. God approves of this foreign occupation, because frankly, we deserve it. The Babylonians aren’t going anywhere. As for you, God says your time’s just about up.” And sure enough, a couple months later, Hananiah dies. But the Babylonians remain in power for decades.

I get frustrated sometimes at the tiny snippets of scripture that we read, divorced from a much larger story that’s far more interesting. This one raises all sorts of questions for us about how we handle times of comfort and time of hardship … which public voices we can trust … and what role God might or might not play in all the things that happen in the world.

Last week in our Wednesday night class, we talked about the role of Israel’s prophets, which was to serve as a system of checks and balances on the monarchy. Kings were expected to respect and honor prophets and heed their warnings. I think the best example is the time when the prophet Nathan calls out King David for arranging the murder of Bathsheba’s husband and taking her for himself. In that case, David confesses his sin and repents. The king was powerful, yes, but there was still an understanding that YHWH was the bigger and more honorable king.

Yet if you read through the books of First and Second Kings, you’ll find that a bad king repenting was the best-case scenario, to be followed by generations of bad kings not repenting and also abusing prophets like Elijah and Jeremiah. While the creation of a monarchy was great for Israel’s popularity and abundance of wealth, that situation didn’t last. After only three monarchs, the kingdom split into two kingdoms: Israel and Judah. Then nearly every king became corrupted by power, and the system of checks and balances crumbled.

As the story goes, God eventually became fed up with this. First, in the time of prophets like Amos and Hosea, God arranged for the northern kingdom of Israel to be conquered by the Assyrians. Then, 150 years later in the time of Jeremiah, the Babylonians conquered the southern kingdom of Judah. That was the end of any Jewish monarchy for centuries. When there finally were Jewish kings again, they also became puppets of far more powerful conquerors, like the Romans.

All this goes to show that people don’t really want to hear what true prophets tell them. And that probably includes us. Because prophets can always be counted on to ask the most uncomfortable question of all: “What if we’re not the good guys?”

I want to suggest that this is a question that we must ask ourselves, both collectively and individually, every time we pray or worship together: “What if we’re not the good guys?” (And please pardon me for continuing to use the word “guy” in the non-gender-specific sense; that’s how it’s always used in the Midwest where I come from.) When we get ready to confess our sins: “Where have I failed to be the good guy?” When we pray at night before bed: “To whom was I not the good guy today, and what do I need to do about that tomorrow?” When we do our work in the world: “Who is perceiving me as the bad guy, and why? How can I learn more and then help change the situation?”

Does this make you uncomfortable? It probably should. We really want to believe we’re good people. Usually we default to that assumption; I know I do. We know what we know and believe what we believe, and if we’re eloquent enough, we can justify our beliefs to others. That’s all well and good, and yay for individualism and first-amendment rights and all that.

But the fact of the matter is that sometimes we’re not the good guys. We mess up. Even when our intentions are good, our impact often is not. And sometimes we’re completely unaware of the impact we have on the people around us—even on strangers. It might happen through a careless comment that dashes somebody’s feelings. Or a habit we don’t know we have, but which other people experience but don’t bring to our attention. Or the way we fail to work against some form of evil in the world, and thus wind up supporting it. Or the way we spend our money in certain ways but not others, and thus have a collective effect on people with less spending power.

If this kind of talk makes you feel like throwing in the towel, well, yeah! It’s another way of getting at a truth that Christians have expressed in lots of ways for two thousand years: We are all sinners—in ways known and unknown. Some Christians use that fact to control and manipulate others, while other Christians run away from it and deny it. I want us at Good Shepherd to be the “good guys” compared to other Christians, but no, it’s true of us, too! We are all sinners. On an individual level, this just means that not one of us is perfect, nor will we ever be. Collectively, it means that we all participate in sinful systems that perpetuate themselves until we work together intentionally to dismantle them.

When Paul writes to the Romans, he urges them to remember two things: One, you were once slaves to sin, but God has set you free. Two, if you believe this, act like it! Dedicate your freedom by becoming slaves to God. Now—ugh—slavery is a metaphor that’s never going to leave the pages of Bible, regardless of the role it played in setting up sinful systems that still affect us today. But I think Paul’s point is rather like Bob Dylan’s point. You may recall that he once sang, “You gotta serve somebody.”

God has conquered sin by forgiving it—by no longer holding us accountable to God’s own laws that would punish our sin. But sin hangs around unbidden when we refuse to let this remarkable news affect us. So every day, every moment, we have a choice. We can serve whatever limiting desire is at work in us right now. Or we can step back and do the bigger thing, which is usually riskier and makes powerful people angry. “Good guys” are never good by default, but only through great effort, and always with an asterisk.

If you’re going to be a “good guy,” Paul implies, then equip yourself. Develop practices of daily prayer, and learn skills that keep orienting you back to the good. Learn what triggers your bad behaviors and begin to control them. Understand your emotions and recognize them so you can decide how to respond to them rather than just reacting. Listen deeply to others before speaking, and reflect back to them what you hear before you proceed. Confess your sins to God, known and unknown, and then be vulnerable with those whose forgiveness you must seek.

But above all, know that you are forgiven. You are redeemed. You, my fellow sinner, are so deeply loved that there are no adequate words to describe what God sees in you. As contemporary theologian Roberta Bondi has put it, “God is absolutely besotted with you!” This is true no matter how “good” you’ve ever been.

At the 8:00 service this morning, my internet connection died completely just as I was about the read the gospel. I was not able to rejoin the service for some time. I want to say, first of all, that I’m so grateful to Mary Aronen, Shannon Leigh, KJ Byford, and Dave Baine for stepping into the void. Mary read the gospel, and then, in discussion form, the four of them preached the sermon together spontaneously! It drives the point home that when your priest isn’t available, you’re still the Church, and the ways you welcome each other are the ways that you reveal God’s love to the world. You can hear their sermon by finding the video post of today’s 8:00 service on Facebook!

We get thrown into such situations, whether we suddenly have to preach the gospel or just offer someone a cup of cold water. Every good thing you do is a good act for its own sake, but it’s also an act of reparation for past sins. God will continue to ask more of you, and yes, Christian ministry can be downright arduous. But it is also marked by a joy so unexpected and so huge that it can fuel our work for all the years that remain to us. We may not be able to call ourselves the “good guys,” but God loves us, and somehow, some way, God’s love will always make up the difference. Amen.