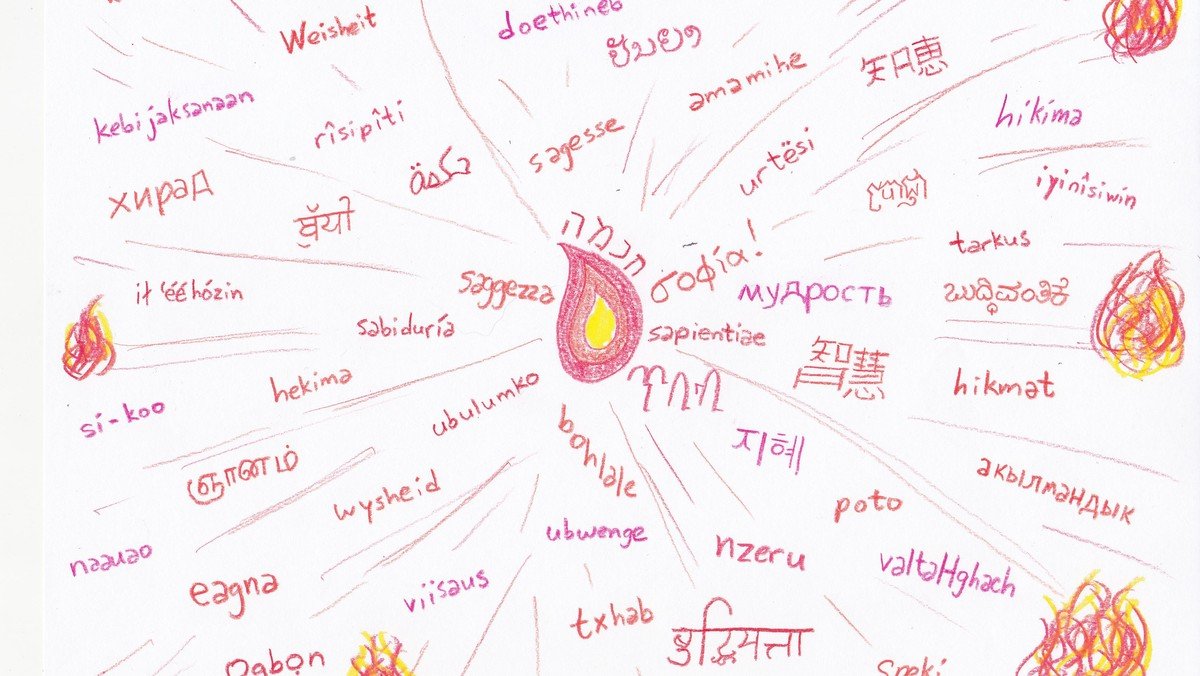 In 1951, Langston Hughes published the book-length poem Harlem, the most famous passage of which goes like this:

What happens to a dream deferred?

Does it dry up

Or crust and sugar over—

Or does it explode?

Under quarantine, we’re all growing increasingly familiar with the concept of the dream deferred. Maybe it’s an experience you’ve carried and had to revisit all your life. Maybe it’s a feeling that has emerged for you in some times more than in others. Or maybe realizing your dreams has been easy up to now.

Compared to God’s deferred dream, my deferred dream of a boat cruise this summer seems rather insignificant. That doesn’t mean I shouldn’t feel disappointed. But that disappointment is tempered by the unearned privilege I was living with.

God’s dream is love. God is love, and that love cannot be contained. God’s love spilled over into a world of creatures, free creatures God invited to share in that love. The free creatures dissented. We built a giant tower to the heavens. In Hebrew, the word for “great” is “g’dol.” The word for tower is “migdol,” which just means “great thing.” In Hebrew, the tower is the archetypal “great thing.” We made our tower as big as possible because we wanted to be great.

Then God said, “Well, their notion of greatness sure doesn’t help the cause of love.” And God scattered us across the face of the earth and confused our languages so we couldn’t understand one another or conspire and collude together.

This story didn’t happen literally in history. But did it happen metaphorically? The evidence is all around.

To this day, we free creatures of God’s creation don’t understand one another, even when we speak the same language. Sometimes the words are really clear, like last Monday, when George Floyd said, “I can’t breathe.” But some people decided long ago that they don’t want to hear or understand, not even the most basic words, the most vulnerable words, the most pleading words, not if it would mean even for a moment admitting they were wrong. Such people stand against the Holy Spirit and against God’s dream.

At the Tower of Babel, God’s dream of a loving, harmonious world dried up like a raisin in the sun. In Egypt in the time of Moses, God’s dream festered like a sore and then ran like blood into the Nile. In the conquest of Canaan and the time of the judges, God’s dream stank like rotten meat, spoiled as the people again pursued greatness. In the time of the monarchy, God’s dream crusted and sugared over, like a syrupy sweet, full of delectable luxuries made available only through slave labor. In the Exile and in Israel’s ongoing occupation by powerful nations, God’s dream sagged like a heavy load. Would the free creatures never learn? Must they always fail to love and then succumb to the consequences of that failure?

Pentecost is the day God’s dream would not be deferred any longer. It exploded.

God had set the stage for it, to be sure. It was a carefully planned protest. First God abdicated power, emptying the divine essence into a mere human being. God infiltrated the corrupted world, undertaking every requirement of being born and growing into adulthood. Then Jesus began to reveal himself to people—just a few at first, but eventually many thousands came to know of him. He said and did miraculous things that showed people who he really was. While he sometimes exercised caution in his movements, at other times he appeared fearless, staring down the murderous mob that wanted to throw him off a cliff. He walked boldly into places where the authorities were actively trying to have him arrested.

This was all part of the plan. So was the day Jesus entered the city on a donkey, strutted into the temple, the holiest of places, and started destroying property and wrecking livelihoods. Was this the explosion? No—just a foretaste, and a very human one at that. Shortly thereafter Jesus was arrested, convicted, and executed. The authorities of all stripes, those dedicated to their own greatness, dusted off their hands. We don’t put up with thugs, they said: we put them back in their place.

But then Jesus came back. He appeared first to his friends and eventually to hundreds of others. He was the same Jesus, yet also permanently altered. His very body was different, like a hologram that you might mistake for something else if you look from the wrong angle. You had to shift your vision to see him, because sometimes believing is seeing. Then, just as mysteriously, he was gone, and what kind of plan was this becoming, anyhow? But who knows better than God how to play the long game?

Oh, you movers and shakers who thought you were so great … you don’t know what greatness is. Love can be killed, but love will never stay dead. God is stronger than you … and God is made of love.

On the Day of Pentecost, God’s dream exploded all over the disciples and set them on fire with joy. Then they went out to light fires everywhere in the world—to destroy the people’s urges to acquire property, security, and greatness—to reclaim the streets and restore them for the people to live in—to proclaim the Good News that greatness is dead, that it was never a worthy goal to begin with. We don’t want to be great. We want to be in love. And that means giving our greatness away.

We’re only human—creatures of earth and water and air, lit aflame with God’s metaphorical fire. We usually get it wrong. Over time, that little protest movement called Christianity became the establishment, a new kind of greatness that subjugated others. It stayed that way for centuries, corrupted in so many ways but also, in spite of itself, consistently surprising many as a vehicle for love. God doesn’t give us power and then yank it back. God works with us to transform it. God is endlessly patient with us, because God knows what it is to be human and loves us even more for it.

But the Holy Spirit didn’t just come that once. She keeps showing up again and again, usually in places that surprise us and unsettle us. She brings lawlessness that leads to loving order, confusion that leads to loving clarity. Sometimes the Holy Spirit is a violent wind, spreading a fire—sometimes a quiet hush, the subtlest possible tipping point. But always, the Holy Spirit leads us out of slavery and gives us a new kind of freedom: not the freedom to do whatever we want without consequences, but the freedom to love, whatever else may happen. As long as we keep loving, life will always be worth living.

And that’s where our baptism comes in. Those of us who are baptized have been recruited into the ultimate protest movement. We stand against greatness and the insatiable ego. We stand against selfishness and hoarding, and we stand against overt and covert subjugation. We go in where the Holy Spirit needs us and wreck people’s comfort, including and especially our own. We make a covenant of love and strive to keep it, and every time we fail, we accept God’s forgiveness and get back on it again. We make peace with a chaotic world by infusing that chaos with caring.

God’s dream is still being deferred. We’re nowhere near its realization. Yet at least we know what it is! We know that God is love and God wants love. The mission of the church has always been to restore all people to unity with God and each other in Christ. So now, in the presence God and each other, let us make clear once again our commitment to God’s protest movement. Let us join with those around the world who have committed themselves to Christ through Holy Baptism and renew our own baptismal covenant.

Presider: Do you reaffirm your renunciation of evil and renew your commitment to Jesus Christ?

Presider: Do you renounce Satan and all the spiritual forces of wickedness that rebel against God?

Presider: Do you renounce the evil powers of this world which corrupt and destroy the creatures of God?

Presider: Do you renounce all sinful desires that draw you from the love of God?

Presider: Do you turn to Jesus Christ and accept him as your Savior?

Presider: Do you put your whole trust in his grace and love?

Presider: Do you promise to follow and obey him as your Lord?

Presider: Do you believe in God the Father?

People: I believe in God, the Father almighty, creator of heaven and earth.

Presider: Do you believe in Jesus Christ, the Son of God?

People: I believe in Jesus Christ, his only Son, our Lord. He was conceived by the power of the Holy Spirit and born of the Virgin Mary. He suffered under Pontius Pilate, was crucified, died, and was buried. He descended to the dead. On the third day he rose again. He ascended into heaven, and is seated at the right hand of the Father. He will come again to judge the living and the dead.

Presider: Do you believe in God the Holy Spirit?

People: I believe in the Holy Spirit, the holy catholic Church, the communion of saints, the forgiveness of sins, the resurrection of the body, and the life everlasting.

Presider: Will you continue in the apostles’ teaching and fellowship, in the breaking of bread, and in the prayers?

Presider: Will you persevere in resisting evil, and, whenever you fall into sin, repent and return to the Lord?

Presider: Will you proclaim by word and example the Good News of God in Christ?

Presider: Will you seek and serve Christ in all persons, loving your neighbor as yourself?

Presider: Will you strive for justice and peace among all people, and respect the dignity of every human being?

Presider: May Almighty God, the Father of our Lord Jesus Christ, who has given us a new birth by water and the Holy Spirit, and bestowed upon us the forgiveness of sins, keep us in eternal life by his grace, in Christ Jesus our Lord. Amen.