Doubt and Wonder at the Playground 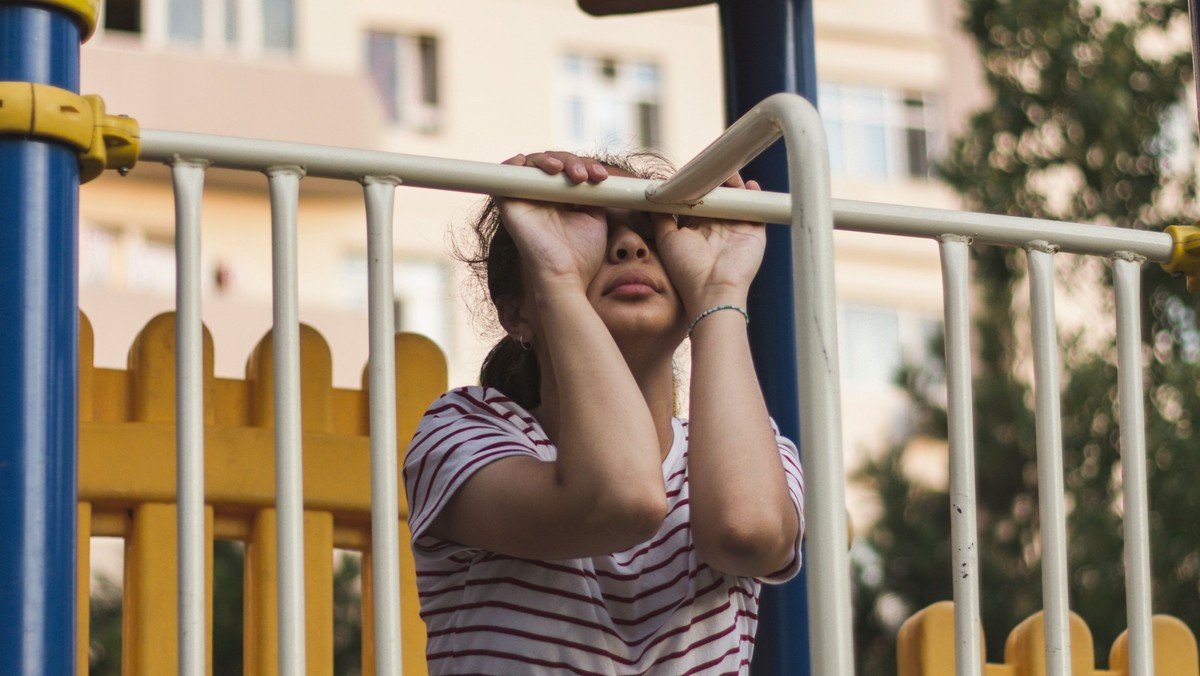 I once knew a young man who, in pursuit of a bachelor’s degree, enrolled in a well-respected, fully accredited Christian college. In his first week of classes, he heard a professor explain that doubt can be a companion and helper to a Christian’s faith.

The young man immediately dropped out of college, saying, “I guess they’re not really Christians there after all.”

In certain circles of Christianity, doubt is seen as the Big Bad—the bugaboo—evidence of Satan undermining God’s work in us. After all, we hear Jesus say today, “Do not doubt, but believe.”

At a glance, you’d think that the purpose of today’s gospel story might be to scold those have doubts. “No, Thomas! Fight it! Don’t give in!” Of course, telling someone to stop doubting is like saying to a teenager, “Stop having acne.” There might be some things you can do to treat the condition, but you do not have total control here. Doubts will come, and doubts will go. The question is, what are you doing with them?

Thomas is my favorite of the disciples, and that’s because I can relate to him. I mean, put yourself in his shoes. On the Day of Easter, he’s not with the group. Jesus, who just died a few days ago, appears within locked doors and invites the disciples to see and to touch his wounds. It’s not just improbable—it’s unbelievable. Yet this is the story they tell Thomas—these trustworthy friends. Now Thomas has to make a decision: does he believe his friends’ wild tale, or does he apply Occam’s Razor and stick with the most likely explanation?

Hang on, though. What could the most likely explanation be? Group psychosis? Deep grief leading to a bunch of wishful thinking? It’s one thing to doubt the story; it’s yet another to figure out what story to replace it with. But Thomas doesn’t even get that far. He just says “I don’t believe you” and shuts them down. And then a week goes by. (I wonder if Thomas spoke to the other disciples during that week?)

Again the disciples gather, and Thomas is with them. And then, strangely, inexplicably, Jesus is with them again. “Peace be with you. Oh, and Thomas? Come here. I have something to show you. Look! I am real. I see that you believe now. But what if you had decided to believe first?”

The story ends there, but let’s entertain that question ourselves. What if we decided to believe first? There’s a bias here toward naivete that I’m not comfortable with. We might as well say, for example, that it was better to believe the coronavirus was a hoax until you caught it yourself, because your gut is more important than the evidence. Or that it is blessed to believe that the virus will just magically go away and we’ll all have a normal summer. This makes no sense. We know the scientists have the better approach here.

So what do your own experiences of faith and doubt tell you about Thomas’s conundrum? How much evidence do you need before you’ll come to believe something that’s not so easy to believe?

The Episcopal Church is generally a welcome place for doubters. I have known some Episcopalians who would claim they’ve always held a strong belief in God, never doubting God’s existence, God’s goodness, God’s power. Good for you if you’re one of them. But I’m not. If someone were to ask me whether I believe in God, the only honest answer would be, “Most days.”

It didn’t use to be most days. In high school I went through a major faith crisis sparked by the song “Dear God” by XTC, now a classic in the world of alternative pop, by one of my favorite bands. The singer rails against God for failing to prevent all the suffering in the world. Before the age of 16, it had never occurred to me to wonder about that problem. After a long, angry prayer in song, the singer concludes, “Dear God, I can’t believe in you.”

What if I didn’t believe either? What would be the consequences?

Eventually I stumbled upon Christian writers and thinkers who weren’t afraid to wonder and to doubt. I learned that many adult Christians come to a deeper faith only by allowing their doubts free rein for a while. Many of them drift away from church, unable to reconcile the reality of the world’s sufferings with the notion of a good, loving Creator. And then, somehow, miraculously, some of them emerge on the other side of their doubts ready to believe in a new way. What set them apart?

I wanted to be one of those Christian adults. And over time, I became one—through doubt, through suffering, through loss, through relationships with many people with their many different perspectives. But most of all, it happened because regardless of my inability to prove anything about God, I just couldn’t stop wondering.

After several years away, I returned to church. At the age of 21 I discovered St. Mark’s Cathedral, a place full of older mentors with plenty of integrity, plenty of knowledge, and above all, plenty of wonder. In time, I would work for a church called, of all things, St. Thomas. That’s right: we even name churches after the disciple who doubted—and who came to new faith not in spite of his doubts, but through them.

I believe it would have been possible for Christ to appear in that locked room the second week, when Thomas was present, and for Thomas still not to recognize him. “Thomas, he’s standing right here!” Nope. Nope. Dead men don’t come back to life. Solid bodies don’t appear in locked rooms. I’m shutting you down. You won’t take me in again!

But this isn’t what happened. Thomas was met with reality of the risen Christ in all his strange comfort and unsettling joy. And then he did believe. Why? Because Thomas, despite his logical mind and skeptical bearing, had already let wonder into the room.

Skepticism and wonder make great playmates. Indeed, when we baptize children in the Episcopal Church, we ask God to give them “the gift of joy and wonder in all your works.” Skepticism will make you effective and persuasive. But wonder will make you joyful. Wonder will allow you to see what your skeptical mind would have missed completely.

Now, I want to give a fair shake to whatever committed atheists might happen to hear this sermon. Wonder is not privately owned by religion—not at all. People don’t get into science just because there’s lots of math in it, but because they are curious and want to keep playing. But the perspective of many committed religious folks is that this wonder is God speaking to you. We can’t prove that. But we can say, “Come and play!” We’ve chosen the playground of religion because we have found joy here. What we have in common is our eagerness to let loose and play in this amazing universe. Come and see!

I want to tell you about another person I knew once. At the church where I was involved my first year of seminary, I met a 14-year-old boy who agreed to let me interview him for a class on youth ministry. He was a thoughtful person, an eager acolyte in the congregation, a devotee of online gaming, hip hop music, the Boy Scouts of America, and world history. I asked him, “What’s a question you would like to ask God?” Now, this was a boy who had just been confirmed in the Episcopal Church. But his question was simply this: “Is the Bible true? Did any of this actually happen?”

Animated by the discussion, the boy elaborated: “If some guy made it all up as a practical joke … do you know how many people would be disappointed, how many lives would be wasted, if it comes out that it’s completely irrelevant, and like, it’s all made up?”

I asked him why somebody would make up Christianity, meaning to imply that people don’t invent a practical joke and then allow themselves to be persecuted and killed for it. But it wasn’t my job in that moment to convince him of anything—only to listen. And he didn’t yet have the historical context to understand the improbability of his suggestion. His was a world in which TV preachers cheat the uneducated and unsuspecting out of their fortunes, in which clergy betray the trust of children and adults alike, and in which not believing in God is just another belief among many other possibilities. So today I pray for two things for this boy, now probably a college graduate: One, that he still has the gift of joy and wonder in all God’s works. And two, that he never stops asking these skeptical questions of wise, faithful mentors.

Don’t squelch your doubts; welcome them to the playground. Our doubts help us to become mature people—to have real faith, not just blind faith. Yes, Jesus said, “Do not doubt, but believe.” But that doesn’t mean doubt is bad. Doubt is a ladder that helps us climb to the next level of the play structure. Eventually, we may find it possible in some circumstances to kick that ladder away.

If you can bear one more metaphor, as we mature and gain experience, our picture of the universe grows, too. Is your frame stretching too tightly? Don’t throw away the picture. It’s just time to transfer it to a larger frame.

John the gospel writer tells us today: “Now Jesus did many other signs in the presence of his disciples, which are not written in this book. But these are written so that you may come to believe that Jesus is the Messiah, the Son of God, and that through believing you may have life in his name.” So like St. Thomas, doubt your faith, sure, in order to test it and help it mature. But also keep faith in your doubts, and never lose the joy and wonder of simply being alive in God’s creation. Amen.