Have You Met the Lamb? 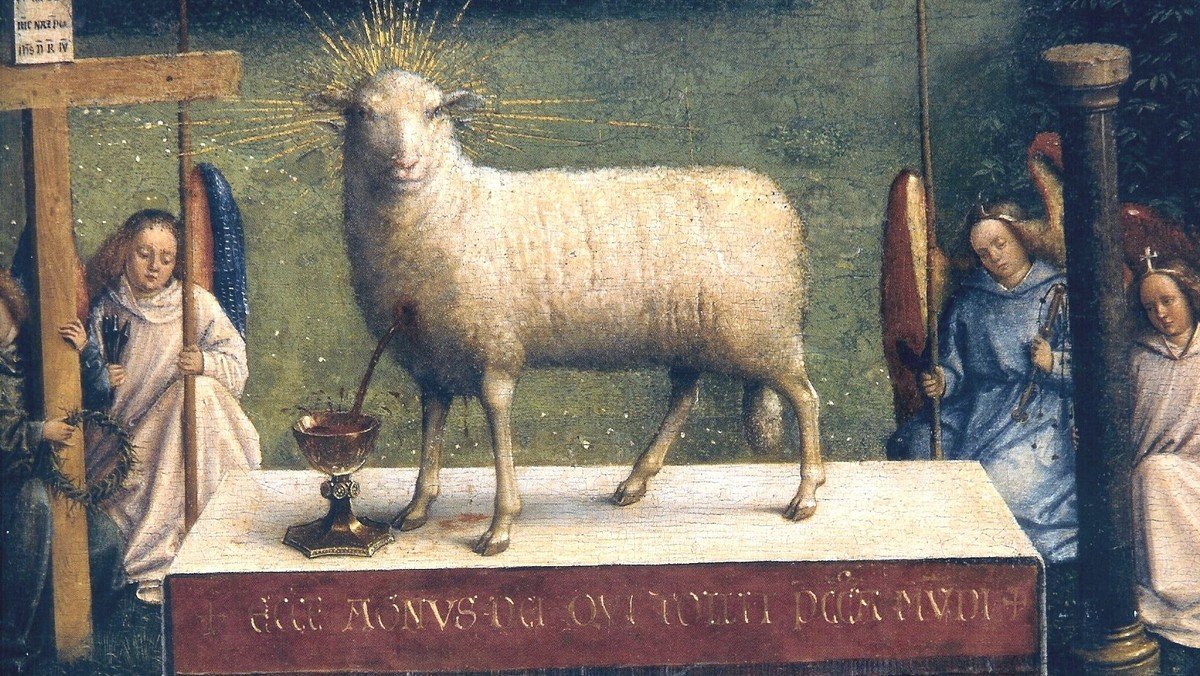 Way back in the mid-’90s at St. Mark’s Cathedral, I met a young woman named Christy Ummel. (Spoiler alert: I married her.) We began dating. Then one summer day she decided it was time. She dropped her voice slyly and asked me, “Have you met The Man?”

I’m sure I looked puzzled. “What?”

A knowing look came into Christy’s eye. “Ah! You haven’t met The Man.”

So Christy took me to her hometown of Bellevue, and we went, curiously enough, to a place called Dixie’s Barbecue and Porter’s Automotive.

We ordered some sandwiches and sat down in this curious little room next door to where these guys were fixing cars. Then a server came over to me and asked, “Have you met The Man?”

I was even more puzzled. Then I saw the tiny little pot in his hand. It contained barbecue sauce.

“Is this The Man?” I asked. Yes. The server gave me a toothpick. I dabbed a tiny bit of The Man onto the toothpick and transferred it to my barbecue sandwich. I took a bite.

It was like a party exploded in my mouth: a college fraternity party, with lots of dishonorable things going on. It hurt. It was delicious. My eyes just about popped out of my head. I needed as much water as I could slurp down.

I had officially met The Man.

Sadly, just a few months ago, Dixie’s Barbecue closed. But for 25 years, it was an Eastside institution; it even has its own Wikipedia page. And I remember seeing the bumper stickers all over the place: “Have you met The Man?”

“Hey,” says John the Baptist one day to a couple of his disciples. “Have you met The Lamb?”

“What?” they puzzle at him.

“I said, have you met The Lamb? That’s him, over there—that’s the guy. Jesus of Nazareth. He’s The Lamb of God. He takes away the sins of the world.”

Andrew looks. “Wait, you mean him? I’ve never seen him before.”

“Neither had I,” John replies. “Then he showed up to be baptized.”

“But John,” says the other disciple—we’ll call him Tod, since his name isn’t given here.

(That’s my default, by the way. A few years ago while reading John’s gospel together, my daughter and I decided that “Tod’ stands for ‘The Other Disciple.’ John is constantly referring to ‘The Other Disciple’ … so we call him Tod.)

“But John,” says Tod, “hundreds of people have shown up for you to baptize them. You’ve become an Eastside Judea institution. You’re the man.”

“Well, yeah,” says John, “That’s kind of how it went. When Jesus came to be baptized, I realized right away, in that moment, who he was. I said, ‘You da man.’ And he said, ‘No, you da man. Baptize me.’” But really, guys? He was just being modest. In reality, He da man. He’s The Lamb of God. And it’s time for you to stop following me around and find out where he leads you.”

“Hang on,” Andrew protests. “We’ve heard you preach all this time about overturning the social order—about the need for the rich and powerful to repent and change their ways, and for the wicked to confess and be baptized all that. So, isn’t that going to happen?”

“Yes,” says John, rolling his eyes, “and if you’d been paying attention, you’d remember that I said again and again that I’m not the Messiah—so I’m not handling those details. I’ll keep baptizing people, sure, but then I’m sending them all to that guy, right over there. I didn’t know him until just the other day. But that’s him—the Messiah, the Anointed One. You’re about the meet The Lamb. Go.” And John heads back down to the riverbank to baptize some more lost souls.

Well, what about you? Have you met The Lamb?

The Lamb isn’t wandering around Western Washington in flesh and blood calling, teaching, and healing people. Not in the same way, anyway. So how do we answer the tricky question, “Have you met The Lamb?” It’s not the kind of question you want to ask in polite company, is it? You might not get asked back to that party. Too many people have already asked the question in off-putting ways that are replete with unspoken assumptions, expectations, and demands—and rather short on self-giving love.

Can I tell you something? I think I’ve met The Lamb.

But before I go there: why a lamb? Why does John use this term?

Today’s gospel reading is the backbone of the Agnus Dei, one of the oldest prayers used in Christian worship. It’s the one that goes like this:

The metaphor of Jesus as a lamb is so rich and lush that it’s hard to know what to do with it all.

When God told Abraham to offer his son Isaac as a burnt-offering, and then stayed his knife hand, what did God provide for Abraham to sacrifice instead? A ram—a male sheep. If it was young, it was a lamb. The message? We don’t sacrifice our children to an angry god.

What did the Hebrews slaughter for their first Passover feast? A lamb. They put the blood of The Lamb or the kid on their doorposts to mark their houses so the Angel of Death would pass over their firstborn sons. The message? We don’t sacrifice our children to an angry god.

When the temple was built to hold the Ark of the Covenant, what sort of animal might you expect to find being slaughtered there as a propitiation for sin? A lamb without blemish—the choicest of the flock. The message? We don’t sacrifice our children to an angry god.

The Lamb is the sacrificial substitute for a human being. It demonstrates our devotion and trust to the powers that hold sway over our fortunes. Understood benevolently, it’s part of a covenant of trust: I give away to God a resource I need, trusting that God will provide enough for me even after I sacrifice it. It’s a prayer and a promise. This is a better understanding than the other model -- and both models show up simultaneously throughout the Old Testament, by the way. We don’t sacrifice people to calm the mysterious forces, to make the community safe from divine harm again. We don’t go in for scapegoats.

Jesus knew this, and John described him as The Lamb of God—the substitute for all the sick systems we use to shore up power and oppress one another. Jesus’ mission as The Lamb will be to call us away from the kinds of sacrifices we make to avoid being fearful victims. He will call us back instead to the kinds of sacrifices we make because we love one another.

But how do we meet The Lamb?

I said earlier that I have met The Lamb. And it happened before I was a priest, before I was a lay leader in the church, before I was a young adult in love at St. Mark’s Cathedral, before I was enjoying diocesan youth retreats in Michigan, and before I was even identified as the child of a priest. Because before I was born, The Lamb knew me. And then I was baptized and the age of a month and a half, and a worldwide community of Christians became responsible for helping me meet The Lamb again and again, at every opportunity.

Meeting The Lamb is ultimately about coming home.

You might know you’ve met The Lamb when you feel overwhelmed with reassurance that all will be well. But reassurance isn’t required.

You might know you’ve met The Lamb when you experience a clarity of purpose and direction that you couldn’t have achieved all by yourself, even if that clarity leaves you troubled. But clarity isn’t required.

When a community rallies around you to carry you through the most difficult times in your life and loves you in spite of your frailties and mistakes, you have definitely met The Lamb. Even if you still feel muddled. Even if you don’t believe things will work out well. When, like Isaiah, you say, “I have labored in vain, I have spent my strength for nothing and vanity” … When you allow others to carry you, like a bleeding Samaritan on the back of a donkey, you have met The Lamb.

And when you have been rejected by the community that used to support you, rejected by the people you used to trust? Well, that’s about the worst thing in the world. And when that happens, you’ve really met The Lamb.

Because The Lamb suffered and died just like we do. The Lamb knows what that’s like. And The Lamb isn’t finished with you yet. You’re just in the middle of your story. You’re just rounding a corner. The Lamb is gathering people, followers, disciples who will become leaders, apostles—people who have met The Lamb and are coming to understand what he’s up to—people who decide to remain with The Lamb even as the situation becomes fraught, even as the angry powers-that-be demand a sacrifice.

That’s when the defiant Lamb proclaims, “These angry powers are not what God is like. I am what God is like!” And then The Lamb submits to a wasteful, unnecessary death. When he dies, The Lamb destroys the whole destructive understanding of sacrifice. No more scapegoats. No more pacifying an angry god. The Lamb demonstrates that it’s not about rules and our failure to follow them. It’s about love and an eternal invitation to fall more deeply into that love—the kind of love that is Resurrection from death.

We are the Church. We’re the people who rally around The Lamb and walk with him to the slaughter. We give ourselves to The Lamb’s project to save the world.

Have you met The Lamb? Do you still want to? That’s what we’re learning to do here.

O Lamb of God, who takest away the sins of the world … grant us thy peace.