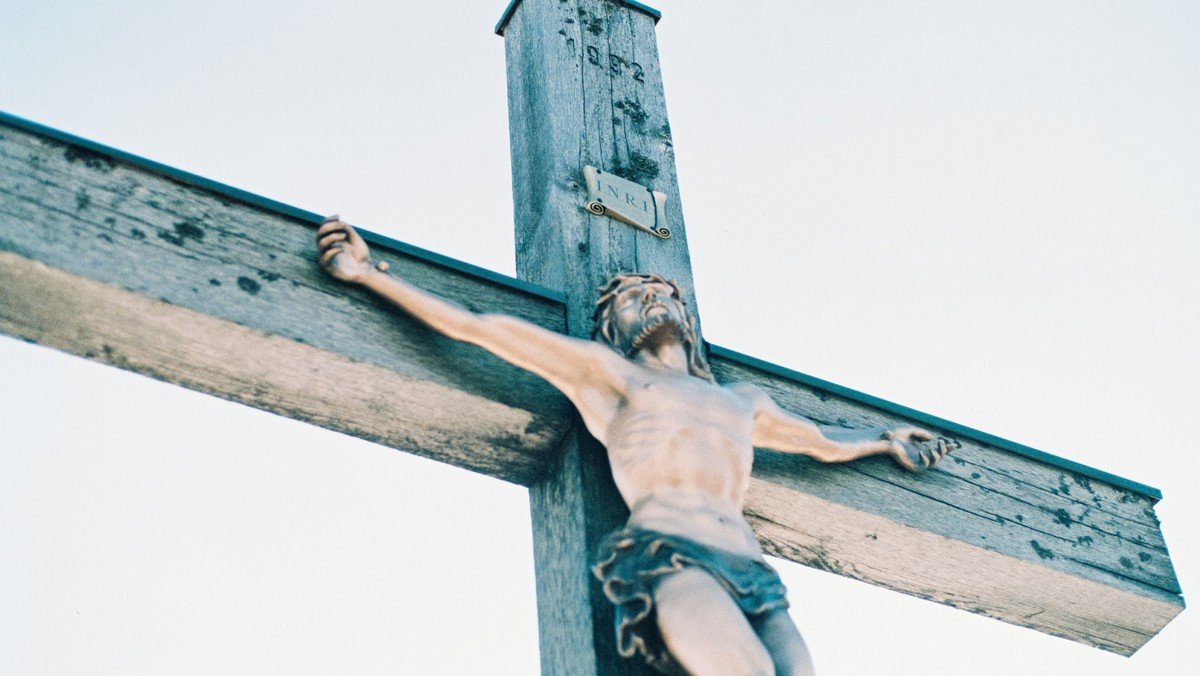 A lot of movies contain a flashback scene—an interruption of the expected flow of time in order to take us back to something that happened earlier. Often a flashback is meant to fill us in about things that we, the viewers, didn’t know before: the childhood trauma that made the bad guy act this way, or the grand sacrifice that the now-deceased husband made for his wife’s sake, or the fatal moment in which the butler “dunnit.” Sometimes the flashback comes near the beginning of the movie, to set the stage for the developing plot. Or right at the end, to provide that one missing piece that unravels the whole mystery. There’s even the kind of movie in which nearly everything that occurs is a flashback that points back to the end moment, which we also saw at the beginning.

Today’s gospel reading is a flashback. Or maybe it’s a flash-forward. At any rate, it doesn’t seem like it belongs here. Jesus on the cross? In late November? But Good Friday was months ago—it’s months away. Why on earth are we talking about this now? Just last week, Jesus was talking about the impending doom of the temple in Jerusalem. Why did we skip over the Last Supper, the arrest, Peter’s betrayal, the trial before Pontius Pilate? We don’t even hear about Jesus’ death and resurrection—just this isolated moment on the cross and his exchange with the bandits hanging on either side of him.

What a strange time warp we find ourselves in. But this flashback does have a purpose. And that purpose has everything to do with the collect we prayed at the beginning of the service: “Almighty and everlasting God, whose will it is to restore all things in your well-beloved Son, the King of kings and Lord of lords: Mercifully grant that the peoples of the earth, divided and enslaved by sin, may be freed and brought together under his most gracious rule; who lives and reigns with you and the Holy Spirit, one God, now and forever. Amen.”

In one of my former congregations, a giant cross looms over the altar. Hanging on that cross is Jesus—but not the broken-bodied, nearly naked Jesus we typically see on a crucifix. This Jesus is dressed in royal robes, with a crown on his head. It’s the kind of cross called a Christus Rex—Christ the King. Today is the Feast of Christ the King—the Last Sunday after Pentecost, and the final Sunday of the Christian year. This is the week when we assert that Christ is our king. And this is another example of the kind of churchy language that we can all too easily become accustomed to. What does it mean to proclaim Christ as our king, especially in a country that has bowed to no king for well over 200 years?

Listen to the Prophet Jeremiah, who tells us today that God is fed up with bad political leadership. God is sick of the government mistreating its most vulnerable subjects. A shepherd who scatters the sheep and drives them away needs to be fired, but the people haven’t invented impeachment yet. So God promises to be the one who deposes their abusive leaders and gathers the flock back together from the many lands of the earth. God also promises to appoint new leadership, shepherds who will take good care of the sheep. Furthermore, God’s work will be so thorough that, when all is said and done, not a single sheep will be missing.

In the letter to the Colossians, we hear that Christ is “the image of the invisible God, the firstborn of all creation,” and that the entire universe was created through him. He is “the head of the body, the church.” That’s quite a claim to make of a first-century Palestinian Jew whose human life spanned only 30 years! But it is a statement of political opposition. It’s similar to the language the Roman Empire used as propaganda to force the submission of the many diverse ethnic and religious groups over which it ruled. The early Christians boldly re-appropriated the language of kingship to proclaim that Jesus of Nazareth, recently executed criminal, was in fact alive again and was actively reigning in the place of the emperor and even over the emperor. And so the language is still political for us today: whatever other authorities and powers may lay claim to our allegiance, Jesus Christ is the one who holds the prior and absolute claim on us. He is the Good Shepherd, the new leadership God has appointed to gather the sheep together.

What does all this mean for our day-to-day life? In the 21st century, what does it mean to follow Jesus Christ more closely than we do our elected officials? To be honest, that thought makes me a little uncomfortable. I like separation of church and state, and when our elected leaders claim to speak with God’s voice, I am rightly repulsed. So it must not mean that we work toward a theocracy. But it also can’t mean just living life in our lane, doing our private devotions, and not talking about religion at cocktail parties. No, we are to be engaged with and change the world. Religion that does not take the prophets seriously is ineffective, neutered religion. As Author Jim Wallis has said, “God is personal, but never private.”

We can and must live our faith out loud and with conviction while also building relationships where possible with those who disagree with us. We can and must look out for the most vulnerable, doing the best we can to work within the world’s corrupt systems and eventually to transform them. This is work we can do with Christians of all stripes, with non-Christians, and with those who follow no god at all.

The work of following Jesus is sacrificial work, even when it takes forms that might seem at first to require less of us. Each week at the Eucharist, we offer to God our “sacrifice of praise and thanksgiving.” Even to come to church costs time and energy and effort and attention—and if this has been a challenge for you, well done! We’re glad you’re here. As this challenge becomes less challenging and becomes a part of the fabric of our lives, our faith deepens, and we learn to make deeper sacrifices.

For following the true king is costly. Christ doesn’t reign from a throne, but from a cross. Christ showed that he was king of all in the very process of losing everything in death. Not only his life, but also his death and resurrection are our blueprint for Christian living. So we must not offer to God offerings that cost us nothing. To follow Jesus costs us our pride—the pride that whispers, “Don’t get too close to people; you know better than they do anyway.” To follow Jesus costs us our fear—the fear that whispers, “Keep all the possessions you can; you might need them later.” To follow Jesus costs us our need to be right, to be in control, to cling to power and to make ourselves the rulers of our own private universes.

Now, these sacrifices will not prevent us from dying, for all mortal lives yield to the same death Christ died. Neither will they save us from the power of death, but that was Christ’s work, and it is already finished. Instead, over time, this sacrificial work will change our very nature, transforming us into good shepherds ourselves. Through our baptism, we, too, join the ranks of God’s new leadership, all the while serving the one Good Shepherd, Jesus, as he gathers the sheep to him. As we become more like Jesus, we can participate more fully in the Kingdom of God.

Does this level of sacrifice sound like a giant burden? Perhaps. But it is also our greatest hope. In giving ourselves to others and to the world, we can learn to “endure everything with patience, while joyfully giving thanks.” No matter what other kingdom may lay claim to us, we have been “transferred into the kingdom” of God through Christ.

And when it seems like the end is near … when it all seems pointless … when entire worlds of meaning come crashing down around our heads, our King Jesus shows us that it is not the end. The earliest Christians also had to trust in Jesus to save and guide them as they, too, sought to transform the world. No matter how scattered we have become, no matter how many dangers separate us from the shepherd, we are gradually being gathered back together. We’re in a flashback, remember? And in that flashback, Jesus is reigning victorious from the cross, dying in agony while simultaneously forgiving his enemies and promising the convicted bandit in his company that truly he will be in paradise this very day.

Christ’s suffering is the way he becomes our king.

Will our own suffering hold any less meaning?

Christ reigns victorious from the cross. This is the final word, and even as we pull it from the middle of the book, it is the final story.

Next Sunday, the new Christian year begins. Next Sunday we will go back to the beginning, the beginning of a new church year, a beginning that is also an ending. In the weeks to come we will hear of the King who is to come—a completely unexpected, revolutionary kind of king—a king who shows us how to live, how to die, and how to be a part of the resurrection to come. Amen.