Sermon: "Too Much Bleepin' Perspective!" 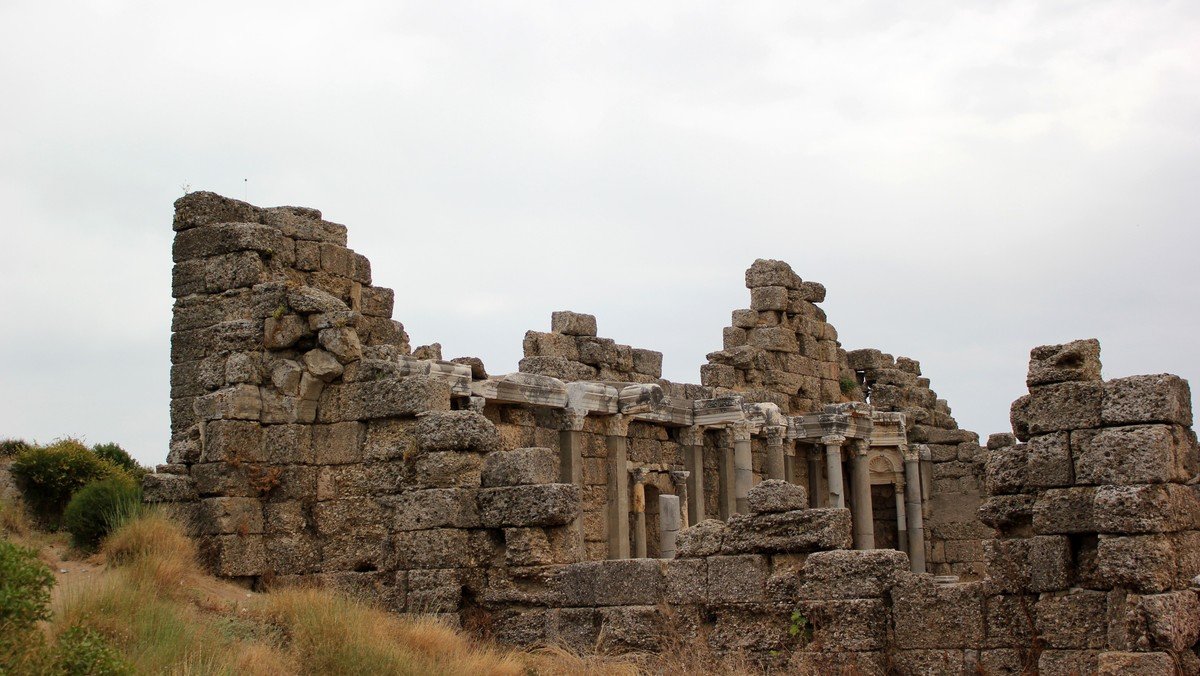 In a scene from the satirical rock ‘n’ roll movie This Is Spinal Tap, the members of an aging, fading rock band go to Graceland and visit Elvis Presley’s grave. For a while, they stand there somberly. They make an effort to sing “Heartbreak Hotel” in harmony, but that falls apart. Then one of the band members says, “It sure gives you perspective, doesn’t it?” And another angrily replies, “Yeah, it’s too much bleepin’ perspective!”

The Church of the Good Shepherd is a young congregation. You might laugh to hear that, because the average age of our members is 59. But at the time Good Shepherd was founded, most of our current members were already born. And we’ve only now gotten to the time when all of Good Shepherd’s charter members have died. I’m not sure when that precise moment was, but it was in very recent memory. Church congregations and entire denominations are always ending and always beginning. We’re always old, and we’re always new. How’s that for “too much bleepin’ perspective”? It’s the kind of paradoxical perspective we hear in our readings today.

From Isaiah, we hear God proclaim, “I am about to create new heavens and a new earth; the former things shall not be remembered or come to mind.” Wait—a new earth I understand, because we’ve sure made a mess of this one. But why does God need new heavens? Aren’t the old heavens good enough? “But be glad and rejoice forever I what I am creating.” Ah, I think I see. God is recreating us, the people of God, and God wants to participate in our newness, and that means recreating everything.

In place of a psalm today, we prayed Canticle 9, which also comes from Isaiah: “Surely, it is God who saves me; I will trust in him and not be afraid.” Newness is exciting, but it’s terrifying as well, and it demands our trust. Newness means that oldness cannot continue. The former things are going away. Well, what if we liked the former things?

Going through change is hard work, especially rapid change that we didn’t see coming. The second letter to the Thessalonians, one of the latest writings in the New Testament, is all about hard work, about how we need to “keep on keepin’ on.” While we are alive, we never get to a settled place. All around us, old things die and new things are born; old people die and new people are born. And all the while, we ourselves are getting older.

But might we grow newer at the same time, even as our bodies and minds age? That is the hope of our faith: we are never finished growing and learning. We can’t be, because we are fated to change at every moment, all the time. We can’t slow down time, and we can’t stop the change that keeps on coming.

If Isaiah is all about beginnings, then Luke’s gospel passage today is all about endings. We humans love stability, and few things speak more clearly of stability than a gigantic, carefully constructed, centuries-old building. I don’t know how often Jesus’ disciples made it into Jerusalem, but maybe it was a little like us going to Washington, D.C. and seeing all the Smithsonian museums and the monuments and Congress and the White House. American society is organized around these buildings in the same way that Jewish life was organized around the Temple.

Now, this wasn’t the first Jewish Temple, but the second. Solomon’s temple was destroyed by the Babylonians. The second temple was built a couple generations after the destruction of the original, but at the time of Jesus’ birth, Herod the Great refurbished it into the glorious structure the disciples saw. So it must have felt both old and new in all the best ways—like the beginning of a time that would go on forever.

“Nope,” says Jesus. “This temple isn’t long for this world. It’s going to be destroyed—every last bit of it.” Say what you like about Jesus’ words of comfort—he could also give people “too much bleepin’ perspective.” Jesus could always be counted on to give comfort or challenge, whichever people needed more.

And this leads us to the most important event in the Bible that is not specifically recorded anywhere in the Bible. Can anyone tell me what that is? That’s right—it’s the destruction of the Second Temple. Anyone know what year it happened? It was the year 70—about forty years after Jesus spoke these words, under the Roman emperor Vespasian. Christians don’t usually realize this, but the destruction of Jerusalem and its temple almost spelled the end of Judaism. Jewish life revolved so completely around the temple that the scattered Jews then had to figure out how even to be a people without it. This was the beginning of a reinvented, reimagined Rabbinic Judaism that continues to this day.

Before this, the Jews, while an occupied people in the Roman Empire, had at least enjoyed protected status as a religion that enjoyed some exceptions to Roman rule. But no longer. As the Jews began to rebuild, they had to understand themselves again as a people always in danger of being exterminated. Being too visible would be a problem. What do you think that meant for the Jews who claimed Jesus as Messiah, in open contradiction to other Jews? That’s right—they had to go. And so we find in many place in the New Testament loaded language that comes from a place of hurt and betrayal, as the Christian believers were no longer welcome to worship with Jews.

At least three of the four gospels are written through the lens of the destruction of the Temple. Later epistles, too, reflect on the reality of that destruction for Christians. When Jesus speaks here, we need to understand that for Luke and his audience, the actual destruction of the Temple is recent history! They are adrift, trying to figure out how to be Christians without a Judaism to attach to, trying to move forward into an uncertain future, wondering whether the world is ending or only just beginning. For them, the Resurrected Christ offers a cosmic perspective of God’s unfailing love to which they can cling.

Yet God’s unfailing love isn’t self-evident, is it? Human suffering has always seemed to speak against it. Isaiah writes of disastrous events that humans continue to suffer through: Wars. Insurrections. Earthquake, famines, plagues—these things can bring an end to nations, communities, and individuals. We can add to Isaiah’s list our own catalog of misery: corrupt governments, financial inequity and instability, bigotry, sexual abuse, gun violence, eviction, homelessness, and underlying it all, a creeping climate disaster we seem intent on ignoring.

Some of these examples are the result of human weakness and sin and participation in demonic systems that oppress us. Others just happen, and while we can understand in a sociological way, or in a scientific way, we simply cannot understand in a way that will make everything OK. We cannot even accept natural disasters as natural, or natural death as natural. It still hurts. In the depths of our broken hearts, none of these things is OK.

In Western Christianity we talk about this world as “fallen,” out of kilter from what God wants for us. Isaiah lists injustices that will no longer happen once God makes everything new: weeping, distress, infant death, dying too young, worker exploitation, slavery, tragedy, violence, destruction, ruin—even animals preying on each other! All of this is wrong. God wants none of it.

Yet these endings go on, and where is God’s promised Newness? Everything we know will end: cultural norms, career, marriage, money, health, your life and mine, the lives of all our children and grandchildren. The Church of the Good Shepherd will end. Federal Way will end. The Episcopal Church will end. America will end.

Yet for all these endings, there will also be a tilling of the soil for new growth we cannot even imagine. Through the eyes of faith, maybe this is where we can spot the Holy Spirit at work. Maybe God is in it all, right in the muck of it, ever present to us and never abandoning us.

Part of the work of faith is to tease out the eternal from the temporal. We often confuse them. All the things I’ve just listed are temporal, and the universe will go on without them. Or perhaps even the universe will end—we just don’t know about that. Even then, though, God will be present, and here’s the thing: we believe that God is always acting to preserve the eternal from out of the temporal. This is the Newness Isaiah speaks of.

At the conclusion of The Chronicles of Narnia, C.S. Lewis describes a new land of Narnia that preserves all the good things even when the first Narnia has been destroyed. He extends that promise to our world as well, from which his main characters have come. There is a brand-new England, and there are no barriers between it and the new Narnia and all the newness of everything old, everything trustworthy and lovely and good. As with Isaiah, there will no longer be any hurting or destroying in this new world.

That’s a lot of perspective. Is it “too bleepin’ much perspective”? Or do we need to be able to step back this far to see what we couldn’t see before, and to take heart?

We are baffled by the mystery of ourselves and each other, and we are offended by the mystery of pain and suffering. We’re not just here because we have nothing else to do on a Sunday morning. We are baffled and offended, and we seek salvation from the world and even from ourselves. Our little church won’t last forever, but it’s here now, and so is the Episcopal Church, and so are the larger communities to which we belong. We are all together here now, to go through endings and beginnings together—the end of what is old, but the preservation of what is good and right and true.

Today, whatever is ending in your life, rest on God’s promise of Newness. Whatever is beginning in your life, may it be thrilling and beautiful and wise and long-lasting. And as we face our own endings and beginnings, may the peace of God be with us all. Amen.