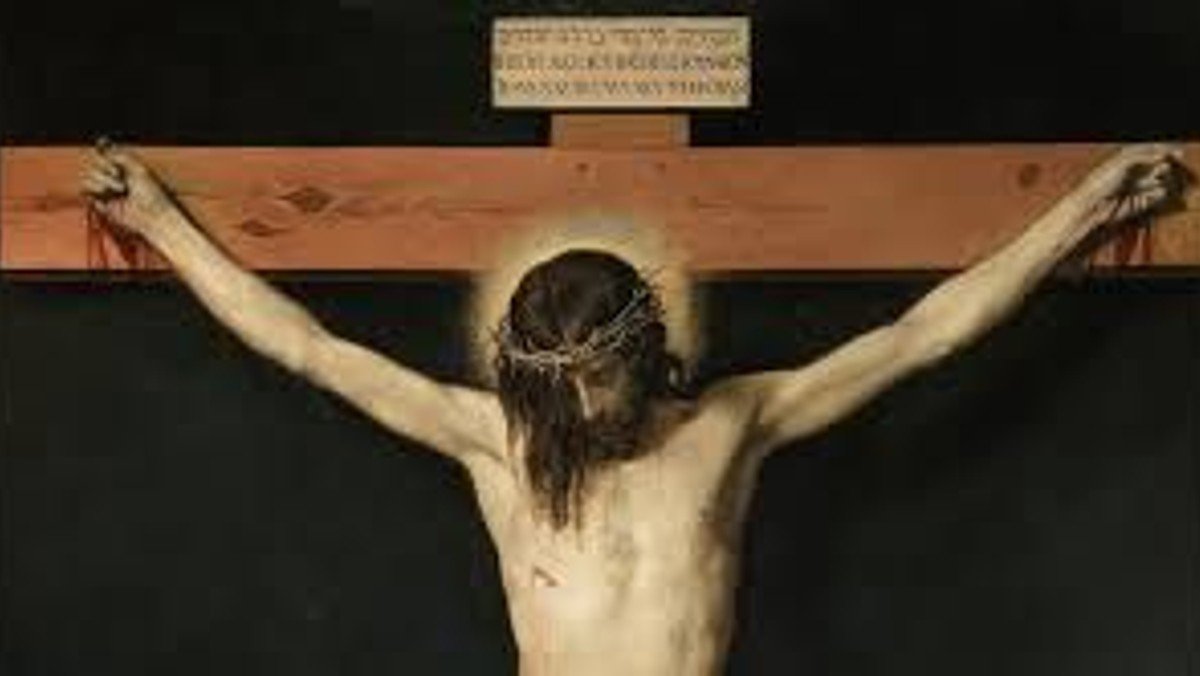 On Sunday, October 6, as I led the first session of our eight-week Episcopal 101 class, I said, "Christians believe that Jesus has dealt definitively -- if not finally -- with the problem of sin. There are many theories about how Jesus has done this, but we don't have time to go over them today." So, naturally, somebody suggested that some more words on this topic might be helpful. Here are some thoughts on the term "atoning sacrifice" and what it tells us about the saving work of Christ. - Pastor Josh

A church near my house once featured a reader board proclaiming: “For God so loved the World that He sent His Son to die for us. – John 3:16.” Every time I passed the sign, I cringed at the misquote; this particular passage of Scripture says nothing about Jesus dying! And then I pondered the way many Christians build their faith around a theory of substitutionary atonement, believing that God sent Jesus to suffer a violent death, and that in no other way could humankind be reconciled to God.

Over the centuries, a number of prominent theories of atonement have found favor in the Church. The earliest predominant theory was called Christus Victor, and it imagined Jesus as a ransom debt that God paid to Satan in order to free humanity. Upon taking Jesus into hell, Satan was surprised to discover not just another human being, but God Himself, and in this way, Satan was defeated. John of Chrysostom explicated this dramatic storyline in his well-known Easter sermon from the fifth century:

Hell took a body, and discovered God.
It took earth, and encountered Heaven.
It took what it saw, and was overcome by what it did not see.

The Christus Victor idea eventually fell out of favor, largely because theologians felt that God was above bargaining with Satan, and that Satan, as a rebel, had no power or right to a ransom. Anselm of Canterbury (c. 1033-1109) filled the void with his concept of substitutionary atonement: that Jesus’ death accomplished our salvation by restoring God’s offended honor. An angry God, fed up with the evil deeds of humanity, needed a blood sacrifice to appease Him. But because He loved us so much, God offered His own son as the sacrifice. Variations on this theory are known by the names satisfaction and penal; in all of them, a violent punishment is needed to set things right, and Jesus is the victim God sends to do the job.

This theory claims as evidence large swaths of the Hebrew Scriptures, including the whole system of temple sacrifice that was still operating in Jesus’ time. The First Letter of John suggests that the Johannine community may also have been a primary source for Anselm’s theory: “But if anyone does sin, we have an advocate with the Father, Jesus Christ the righteous; and he is the atoning sacrifice for our sins, and not for ours only but also for the sins of the whole world."

Anselm’s substitutionary atonement has become the dominant theory for many Christians in the world today; many Protestant churches even treat substitutionary atonement as a litmus test for orthodoxy. But it presents a number of theological problems. Is there some higher law—higher than God, even—which dictates that this sacrifice must take place? Is there no free gift of redemption: that is, must the debt of sin be paid back? Is there no path to redemption other than violent punishment? Fortunately, by no means has Anselm’s work been the final word on the matter.

Not long after Anselm, Abelard (1079-1142) put forth his “moral influence” motif to counter the idea that we should saddle God with such a fragile sense of honor. Abelard suggested that instead of God changing His attitude, it was required that we humans change ours. Jesus’ death was a demonstration of the depths of God’s eternal love, and it was meant to inspire moral change in humankind.

J. Denny Weaver points out that each of these three atonement motifs focuses on a different audience’s need to change. In Christus Victor, the crucifixion defeats Satan and eliminates his power. Anselm’s substitutionary or satisfaction model seeks to change God’s mind about damning the creatures He has created. And in Abelard’s moral influence motif, it is we, moved by an example of love, who need to change our ways.

But in all three of these theories of atonement, Jesus is the game-changing sacrifice and God advocates violence against His own son. Weaver writes that each of these theories “appears to reduce the life of Jesus to an elaborate scheme whose purpose was to produce his death.” Perhaps most importantly, the central nature of the crucifixion allows for significant doubt about what role, if any, the Resurrection plays.

So of what nature is this “atoning sacrifice”? And is there a theologically sound version of atonement theory that can fit with the nature of the Jesus of the Gospels?

A variation on the Greek word translated “atoning sacrifice” is found in Hebrews 2:17: “Therefore [Jesus] had to become like his brothers and sisters in every respect, so that he might be a merciful and faithful high priest in the service of God, to make a sacrifice of atonement for the sins of the people.” Jesus is not only the sacrifice but also the great high priest offering the sacrifice, and he does so out of mercy. The word used here for merciful carries connotations of pity or sympathy.8 But this is the only time this word appears in the Christian Scriptures. At other times when mercy is the quality being expressed, “atoning sacrifice” keeps showing up in different forms.

In Luke 18:13, in Jesus’ parable of the two men praying in the temple, we hear: “God, be merciful to me, a sinner!” This could be rendered, “God, atone for me, a sinner!” This man doesn’t want God’s pity; he wants a fresh start. He wants righteousness: right relationship with God.

In Romans 3:25, Paul uses the same word immediately after demonstrating that we are no longer captive to the Law through our new life of faith in Christ. He writes:

For there is no distinction, since all have sinned and fall short of the glory of God; they are now justified by his grace as a gift, through the redemption that is in Christ Jesus, whom God put forward as a sacrifice of atonement by his blood, effective through faith. (NRSV)

Closer to the original meaning of the word is “mercy seat,” although it is not usually translated this way.9 In Leviticus 16:13-16, the “mercy seat” is the cover to the Ark of the Covenant, and the high priest is instructed to sprinkle the blood of animal sacrifices on it. But rather than make that connection to the ancient Hebrew rituals, most English translations simply state that Jesus was “a sacrifice of atonement” (NIV) or “a propitiation” (KJV).

We find one more interesting use of a related word in Matthew 16:22, an adjective meaning gracious or merciful. Jesus has just told the disciples that he will be killed and rise on the third day. Peter’s reaction could be paraphrased, “Mercy me, never!” or “May God’s mercy always prevent such a thing!”

Once we have shown that the word translated “atoning sacrifice” runs deep with undercurrents of mercy, questions inevitably follow. Is Jesus the mercy seat, the sacrifice, or the priest performing the sacrificial ritual? If he is the priest, is he also the sacrificial animal? Is the sacrifice meant to appease God’s anger, restore his lost honor, or pay a debt to God? And if so, where is the mercy? Mercy implies the revoking of deserved punishment. If “atoning sacrifice” carries a connotation of mercy, we may well wonder why any creature must die to bring it about, not least of all Jesus.

Another kind of mercy is at work here, but it is not about pity or any sort of legal transaction. It is about victory. Weaver presents his case for a theory of atonement called “Narrative Christus Victor.” Drawing on the original Christus Victor motif, along with the work of Rene Girard and other theologians, Weaver sees importance in the entire story of Jesus. God sends Jesus as a gift, but in collusion with the forces of evil in the world, we humans kill him. We might see the Nativity as bait for the evil forces, the Crucifixion as the taking of the bait, and the Resurrection as the surprising victory that simultaneously unmasks the evil forces and knocks death, their greatest weapon, from their hands.

Weaver writes: “In carrying out his mission, Jesus was ready to die and he was willing to die. It was not a death, however, that was required as compensatory retribution for the sins of his enemies and his friends. It was a death that resulted from fulfillment of his mission about the reign of God.” By being born as a human being, it was a given that Jesus would die. Furthermore, the things Jesus said and did, upsetting the status quo of Temple Judaism and inviting a reaction from the evil forces at work in the world, all but guaranteed that his death would be a violent one. But violent death or no, Jesus was a gift of mercy to us. Through Jesus, God intended to end any notion of substitutionary atonement or blood sacrifice. As Weaver writes: “Rather than continuing it, Jesus’ death unmasks and thus ends religion based on sacrifice or retributive violence."

So in the “Narrative Christus Victor” model, it is the living example of Jesus and Christ’s Resurrection that accomplish salvation—not his death. It is true that he had to go through death in order to get to the Resurrection. By his entire life, Jesus demonstrated that love will hurt us and might even kill us. But through God’s grace, love is more powerful than the forces of domination that threaten it.

Those who choose to live in the hope of the Resurrection have cause for endless celebration, no matter what indignities are put upon them by the evil powers at work in the world. The “atoning sacrifice” accomplishes salvation by freeing us from the fear of death. Jesus has gone ahead of us through death and has come back to show us that it is the gateway to eternal life.