The Blood of Abel 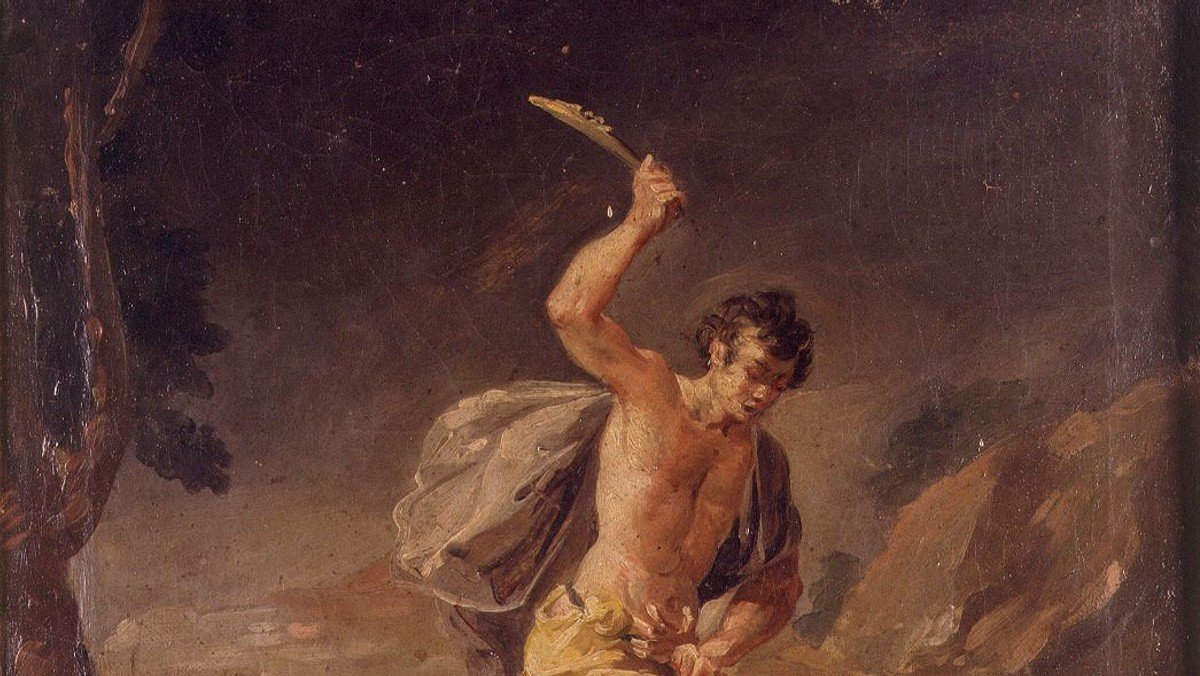 There’s a long-standing rumor in the Episcopal Church that as we hear from several parts of the Bible each week, over the course of our three-year cycle we make it through nearly the entire Bible. That’s not true at all.

Now, the daily lectionary cycle can be found at the back of The Book of Common Prayer. And if you’re reading that on your own time, you’re reading a lot more of the Bible. But I imagine that for most of us, our most significant encounter with the Bible is what we hear read on Sunday mornings.

The upshot is that while we have a standard canon of Scripture contained within the covers of our Bible, we also have in liturgical churches a “canon within the canon.” We accept that not all Scripture is created equal: certain parts are far more important than others. Only twice in three years do we hear something from the Book of Numbers, only once from the Book of Judges, and never from Esther or the Song of Solomon. And that’s a shame, because wow, what great stories and poetry we miss out on!

Now, by and large, I do love the weekly lectionary and the way it walks us through the seasons of the church year. But of all the omissions from our three-year lectionary, I’ve come to view one as truly inexcusable. At no time do we read in church on a Sunday morning the story of Cain killing his brother Abel. We only hear it referenced in today’s reading from the Letter to the Hebrews. And I don’t assume that everyone knows the story. So today I’m going to take us on a little detour. We just heard about

… Jesus, the mediator of a new covenant, and … the sprinkled blood that speaks a better word than the blood of Abel.

Asterisk. I’m now going to read to you from the Book of Genesis, chapter 4, verses 1-16. Furthermore, I’m going to add my own inline comments, the way people probably did when reading Scripture in worship in Christianity’s earliest days.

OK, let’s stop there for a moment. The Hebrew verb “to know” is also a euphemism for sex. The ancient Hebrews were a modest people, sensitive about nudity and private about sexuality. Funny thing, though: the Hebrew verb is literally “yada.” In other words, Adam got together with Eve, yada yada yada, she got pregnant. I thought you might appreciate that bit of trivia.

And she conceived and bore Cain, saying, ‘I have produced a man with the help of the Lord.’

The boy’s name in Hebrew is similar to the Hebrew verb meaning “create” or “produce.” And this kind of thing happens a lot. In other words, every translation of the Bible necessarily strips out a bunch of delightful details.

Next she bore his brother Abel. Now Abel was a keeper of sheep, and Cain a tiller of the ground. In the course of time Cain brought to the Lord an offering of the fruit of the ground, and Abel for his part brought of the firstlings of his flock, their fat portions. And the Lord had regard for Abel and his offering, but for Cain and his offering he had no regard.

Why is this? We don’t know. Some think it’s an origin story to explain the slaughtering of animals in ritual worship. Others think it’s about the conflict between farmers and ranchers, like in the musical Oklahoma!: “One man likes to push a plow/ The other likes to chase a cow/ But that’s no reason why we can’t be friends.” Anyway, the text itself doesn’t give the reason, so maybe we don’t need to know it. I think we’re supposed to focus instead on Cain’s reaction to being rejected.

So Cain was very angry, and his countenance fell. The Lord said to Cain, ‘Why are you angry, and why has your countenance fallen? If you do well, will you not be accepted? And if you do not do well, sin is lurking at the door; its desire is for you, but you must master it.’

Oh, my friends, we’ve just leaped into a story at the heart of every one of our souls! When you feel slighted or insulted, what is your natural reaction? Do you shrink back, or flare up? Most people seem to do one or the other. Oh, but if only we could all set aside our hurt feelings long enough to seek more information from the other, and from within ourselves! When we just react, our emotions have hijacked our behavior. But when we reflect first, we can look at our options and choose the best possible response: we can master the potential sin. If you figure out how to do this reliably, tell me how.

But now let’s find out how Cain responded to God’s warning.

Why do we attack each other? Insecurity. Fear that something is being taken away or kept from us. The feelings may or may not be warranted. But for God’s sake, why do we attack so readily? I’m reminded of the story in the news recently of the boy who didn’t take off his hat during the National Anthem, and of the man next to him who slammed the boy to the ground, seriously injured him … and then baldly claimed he was justified in doing so. This is how we humans are.

Then the Lord said to Cain, ‘Where is your brother Abel?’ He said, ‘I do not know; am I my brother’s keeper?’

It’s a popular expression of biblical origin: “Am I my brother’s keeper?” Usually when people use it, they hint that the answer is no. “We’re both individuals, so what do I have to do with him?” (Guess what? ‘No’ is the wrong answer!) Cain lies to God through his teeth, and while I can hear his fear, anger, and hurt, I hear no remorse. None at all.

And the Lord said, ‘What have you done? Listen; your brother’s blood is crying out to me from the ground!’

It’s a stunning, terrifying piece of poetry. The blood of Abel cries out to God for an answer. What will the answer be? God continues …

‘And now you are cursed from the ground, which has opened its mouth to receive your brother’s blood from your hand. When you till the ground, it will no longer yield to you its strength; you will be a fugitive and a wanderer on the earth.’

Let the punishment fit the crime. Already Adam has brought on himself the punishment of land that doesn’t readily give up its resources but requires weeding and tilling. And now his son Cain becomes the first person to allow his sinful tendencies to utterly destroy his career.

Cain said to the Lord, ‘My punishment is greater than I can bear! Today you have driven me away from the soil, and I shall be hidden from your face; I shall be a fugitive and a wanderer on the earth, and anyone who meets me may kill me.’

Cain can no longer farm, but even worse, he can no longer look God in the eye. He must leave this place. Where will he go? Will others seek to take his life in return for Abel’s?

Then the Lord said to him, ‘Not so! Whoever kills Cain will suffer a sevenfold vengeance.’ And the Lord put a mark on Cain, so that no one who came upon him would kill him. Then Cain went away from the presence of the Lord, and settled in the land of Nod, east of Eden.

Ah yes! The mark of Cain. You probably know the expression, but do you know to what it refers? Whatever this mark is, it’s supposed to serve as a warning not to kill Cain, but to let him live a lonely life, far away from the many other people who … who … wait, where do all the other people come from? There’s only Adam and Eve! Yet in the next verse, Cain will find and marry his wife. Well, that pretty much proves that we’re not intended to take the story as literal history, but as a piece of deep wisdom. We are to allow it to seep into our bones and help guide our steps.

Already by chapter 4 of the Bible, we have the first sin, that of Adam and Eve. We have the first sex. The first children. The first competition. The first jealousy. The first rage. The first murder. We have crime and punishment. And we have God’s word that murder is to be punished not with death, but with banishment, because Cain’s story isn’t over yet. Oh, there’s so much more story still to come.

But let’s jump back from our sermon-length footnote to today’s reading. What speaks “a better word than the blood of Abel”? Jesus calls Abel the first prophet; this doesn’t get remarked on enough. Through his murder, Abel cries out the first prophetic word against human nature. And then Jesus, through his martyrdom, reclaims the belovedness of humankind.

Death and murder have not magically gone away. But if you buy into this whole Christian thing, there’s something to the idea that they look different on the other side of Jesus’ death and resurrection. The victim is the victor. The forces of death are shown to be impotent.

Maybe that’s why we never hear the story of Cain and Abel read on Sundays. Maybe we don’t need to … because that story has been undone. Our violence and our fear of death come to no effect in Christ: in him all our fears will find relief. The wreckage and futility of human nature have found their ultimate context in the blood of a man who is God, dwelling among us in all our folly and cruelty.

Yes, when we spill blood, we damage our souls. But the healer of our souls is alive and can never be killed again. So until all that is created is removed—until a kingdom comes that cannot be shaken—rest today in that healing. Know that Jesus forgives your sins, holds your life in his hands, and whispers, “Hush! You need fear death no more.” Amen.