God in Our Own Image 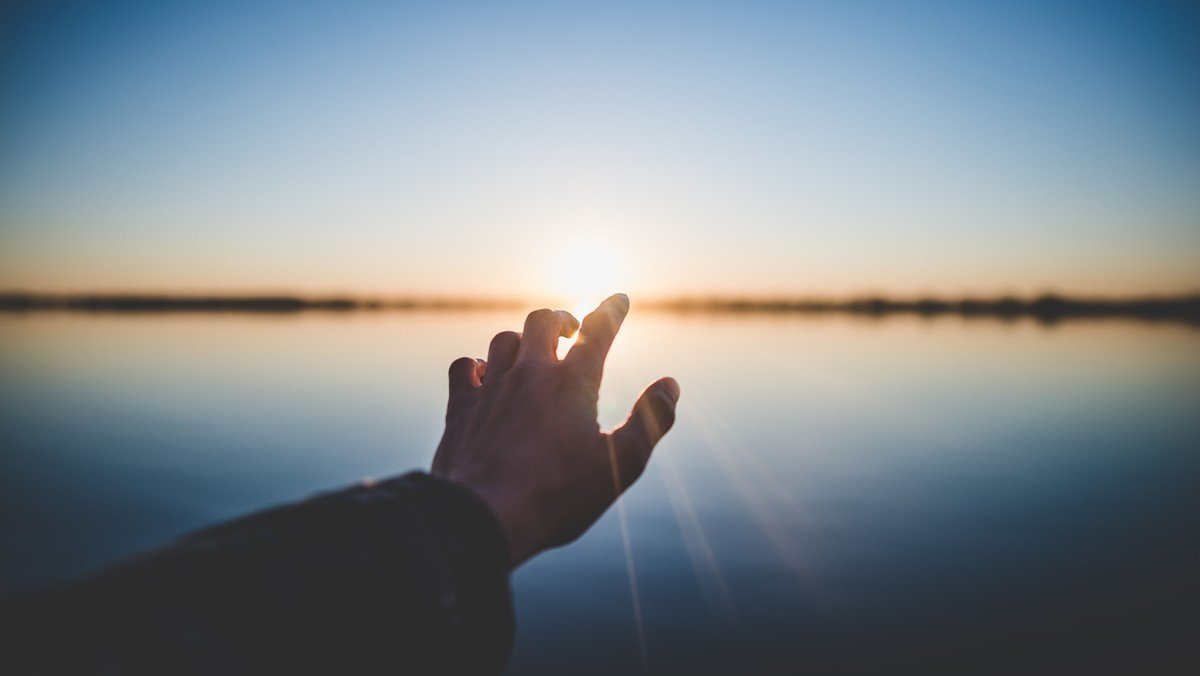 Today we hear Jesus teaching his disciples how to pray. This seems kind of odd, because the disciples were all faithful Jews who had been taught from the cradle how to pray. But Jesus has given them a new way to imagine their relationship with God, and they wisely ask for new tools for maintaining that relationship. And Jesus is happy to provide.

If you grew up as a Christian, you have probably memorized and internalized the Lord’s Prayer. It is the most beloved prayer of our faith, because Jesus himself taught it to us. And for two millennia, we have cherished its opening phrase: “Our Father.” The notion of God as Father wasn’t new, but Jesus expressed it in an especially tender way. We may well think of God as our Father—and Mother is also fair game, since God created all parents. But let’s be honest: the fathers and mothers in our experience probably fall far short of what Jesus is talking about.

I want to suggest that we always create God in our image, rather than the other way around. This is what atheists accuse us of, you know: that we are making up a god and projecting all our insecurities onto him. I think they’re right: we do this all the time. And that’s because we don’t have any other choice. We can only work with what we know. But our failure to understand God says nothing about whether God is real. Of course God is real: God is the reality because of which all reality is real. All our lives we can try to know God, but we’ll never actually get there. So our imagination must play a role in our understanding.

Here’s an example. We all know that when it comes to parenting, consistency is important. I learned this before I even became a dad. That doesn’t mean I’ve always been great at it. And who has? You see it all the time in public: a child is acting up loudly on the bus, for instance. The parent blurts out, “If you don’t stop that right now, we’re getting off this bus and walking!” Yeah, well, what if the walk is four miles, with a stroller and shopping bags, uphill, and a screaming toddler? This threat is not likely to be carried out. Now, all parents occasionally lose their cool and paint themselves into a corner. Hopefully we never find ourselves uttering the worst phrase of all: “If you walk out that door, don’t even think about coming back!” Oops—the kid called the bluff. Well, now what?

When we imagine God as eager to punish, ready to fly off the handle and destroy us, we have made a god we can imagine, a god who is like us, like an irritable parent or even a narcissistic dictator, so wrapped up in the needs of the ego that the powerless must suffer for it. In reality I don’t believe that God has ever broken a promise or a relationship. But would the prophet Hosea say the same?

Let’s talk about Hosea for a minute. He’s a prophet who might make you want to stick a “Parental Advisory” sticker on your Bible. Hosea comes on the scene in Israel around the same time as Amos, and in the course of his book, God alternates between father and lover, which really is twisted. The first thing Hosea proclaims is that God says, “Go find a promiscuous woman and marry her, because that’s how Israel has acted toward me.”

Then Hosea gives Gomer’s three children prophetic but insulting names. Jezreel is the name of the place where the notorious Jezebel met her violent end. The second child is named Lo-ruhamah, which means “no pity.” The third is Lo-ammi: “not my people.” In short: “That’s it. I give up. Israel, I divorce and disown you. You are not my people and I am not your God!”

Hosea proclaims the rift between God and humankind in a way that is clearly abusive to his poor family. (Can you imagine trying to make friends at school if your name were “No Pity”?) We don’t know how much of this literally happened, though it is true that the prophets of ancient Israel did some very strange things to make a point. Throughout the remainder of the book Hosea hears God saying, “You know, I brought you out of slavery in Egypt, and I can put you back again.” Is God a fed-up parent … or an abusive lover?

Yet this reading ends with a familiar turn toward hope, a restatement of the promise to Abraham: “The number of the people of Israel shall be like the sand of the sea, which can be neither measured nor numbered.” Sure … that’s what all abusers say. They’ll always take you back, but they’ll assert their emotional power over you in the process. Do you see why this metaphor is so problematic?

The ancient Israelites knew that all metaphors break down. And throughout their sacred writings, they put a big fat spotlight on their own shortcomings. I have yet to learn of any other culture on earth that did this so flagrantly and authentically. The Israelites interpreted the disasters in their lives as punishment from God, but as they recorded their history, they never forgot that they would always be God’s chosen people, destined for health and wholeness, accomplishing their work of blessing all the peoples of the world. The living God does not break promises.

So if you’re ever tempted to view the Old Testament as the home of the angry, abusive God, as opposed to the all-loving, all-forgiving God of the New, that just means you haven’t read enough of it yet. When God is portrayed as angry, it is to express that God cares so deeply. The imagery may disturb us, but when we hang in there, we see that it leads not to shallow platitudes, but to true reconciliation and wholeness.

We Christians are an example of other peoples of the earth who have come to be blessed by God’s chosen people. We see the law of Moses and the proclamations of the prophets come to fulfillment in one brief human life—in Jesus’ words and actions, punctuated by the ultimate prophetic act of being killed and rising to life again.

The Church understands Jesus as the icon of the living God, the one whom we have longed for but whom even the most confident parents among us could never hope to imitate, and whom even the most faithful lovers would cheat on. Have we created this God in our own image? Or could it be that this longing in us, this desire for a God who loves and cherishes us, points toward a reality we can only glimpse? Could we be catching just a hint of the God we cannot imagine and therefore cannot possibly have invented?

After teaching his disciples to pray, “Our Father,” Jesus shifts to yet another metaphor—that of a friend. In more than one place in the gospels, this is the term he uses to describe himself. But here Jesus inserts a humorous story about what prayer can be like. You are surprised by the arrival of guests in the middle of the night, and you’re out of food. So you go next door to your friend’s house and bang on the door: “Hey, help me! My pantry is empty!”

The friend irritably calls back, “No! Stop it! It’s the middle of the night! You’ll wake the baby!”

But you keep pounding on the door: “Come on! I know it’s the middle of the night—that’s why I’m coming to you instead of going to the store! Because it’s the first century and the 24-hour Safeway hasn’t been invented yet!”

The friend gets angrier: “You’ve got to be kidding me! In what world do your in-laws show up in the middle of the night and expect a meal?”

Bang bang bang. “Sorry, I can’t help it! And the hospitality rules of our ancient culture are very clear! It would be a disgrace for me not to be able to feed them! If anyone else found out, it might affect the property values of the whole neighborhood!”

From inside you hear the baby begin to wail loudly. You hear your friend knock over an end table and swear under his breath. Then the front door opens, and a loaf of bread is shoved in your face. It turns out to be the most delicious bread you’ve ever eaten, and your guests never forget it.

Is God like that? What does that even mean? And Jesus doesn’t stop at one story. “Daddy, can I have a fish?”

“Aaaaahhhh! It’s a snake! It’s a live snake! Forget it! Can I have an egg instead?”

“Aaaaahhh! It’s a scorpion! I thought you loved me!”

Look, says Jesus. God is not an insensitive friend or an abusive parent. God knows what you need and how much you need it. If you fail to ask, that doesn’t mean God doesn’t know. But when you do ask, you’re investing in the relationship. You’re demonstrating your commitment and your trust. And you’re safeguarding against the human complacency that upset God so much in Hosea’s time and still does today. So pray. Whatever it looks like, just pray.

God is parent or lover or friend, depending on how you want to tell the story today. All these relationships take work and commitment from both sides. Yes, with God it’s fundamentally an unequal relationship, and that’s why it’s so easy to imagine a cruel, abusive God. We’re always in danger of creating God in our own image, and that’s because we can never truly leave the realm of metaphor.

But by becoming one of us in Jesus, God breaks down the barriers. If God is a parent, then God bears with us through the diapers-and-tantrums phase and the surly teenager phase until we can be more like equals. If God is a lover, then God loves us with mutual respect and wants us to grow more and more into who we are always becoming. If God is a friend, it’s the friend in the anonymous quote who “knows you as you are, understands where you’ve been, accepts what you’ve become, and still gently invites you to grow.”

Today, may you rest securely in the knowledge that God—father, mother, lover, friend, and so much more—is always loving you into healing and wholeness. Amen.