Roll Away Your Stone 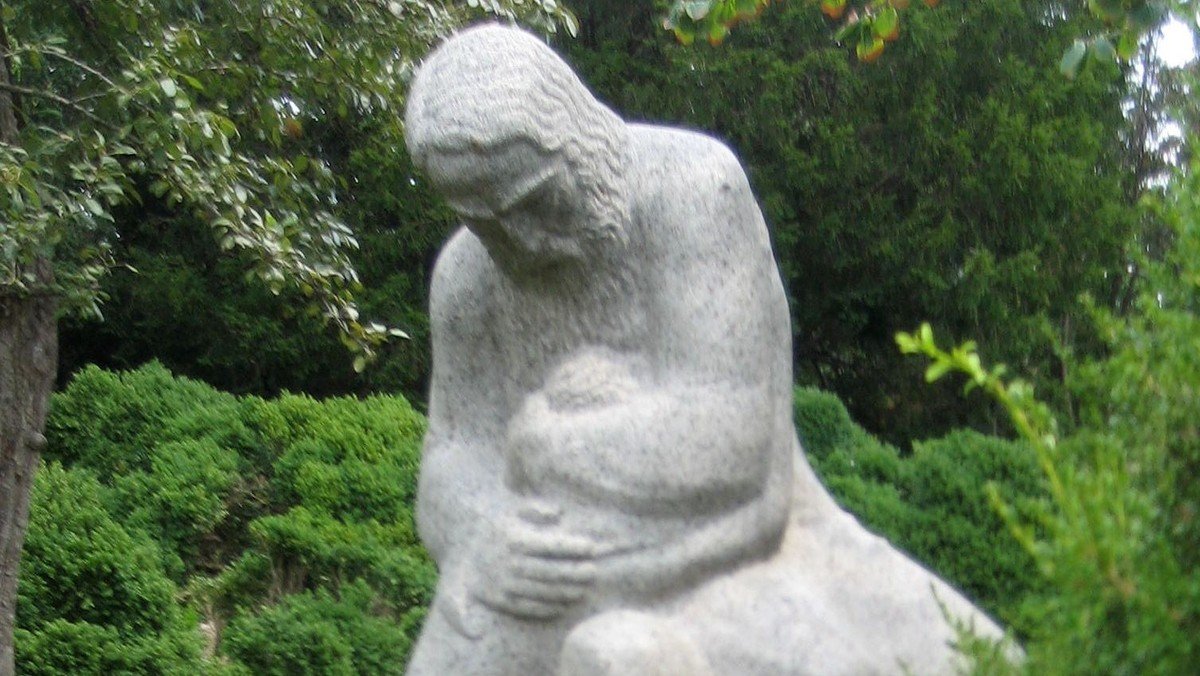 Photo: Sculpture of the Prodigal Son and his father, from the Bishop's Garden at the National Cathedral in Washington, D.C.

Have you ever needed a new start? Whether you maxed out one day and needed to take a walk, or whether you walked away from something many years in the making, we all know the feeling. You cannot continue to go in the direction you’re going, so you don’t.

The problem with no longer continuing in the same direction is that, then, you can go in any direction you choose.

Our choices don’t always feel that limitless, though. There are factors. Maybe you cannot continue in a dead-end job, but you have to pay the bills. Maybe a toxic marriage is killing you, but you don’t know whether the kids will be better off with a single parent who is healthier but who can’t adequately feed them. Maybe you have to choose between gangs outside your door there, or ICE agents outside your door here.

It’s easy to have sympathy for people in such situations: they are our friends, our family, and they did nothing to deserve this. But then there are those who have brought it all on themselves, and we know it. And sometimes, those people are us.

Sometimes we make life-altering decisions out of weakness, out of compromised judgment, out of an urge for instant gratification. Give me the money now, says a child to his father, and I’ll live it up. In other words: “Drop dead, Dad: your only purpose is in the half of the inheritance that’s coming to me.”

What if you said that to your own father? Even more shocking, what if his reaction were to say, “OK”? Some parents let their disappointment in their children pollute the relationship, but not this one. This is one zen dad.

Yet the Jewish and Christian understanding of our relationship with God is rather like this, all the way back to Adam and Eve. We are given the gift of life in paradise, but we sacrifice obedience to chart our own path, though that path brings with it fear and death. It also brings self-definition, and that’s why it’s so tempting. We are not God—only very nearly so, not quite. So we choose to emphasize the difference. This is what we call the sin of rebellion.

Sin is usually thought of as “doing bad things,” but looked at from another angle, you could simply call it “a perception of separation from God.” We were made to be at one with God, but we chose not to be. Now we lack the understanding to find our way back home to our source. Or maybe we have some amount of understanding, but we still lack the humility.

I don’t know quite what’s in the head of this wayward son. We know he “squandered his property in dissolute living,” but whatever else that may mean, the narrator doesn’t go into detail. (The older brother will take at least one guess.) Suffice it to say that the younger son took the money and blew it all.

Now the boy deserves … what? What does he deserve? Does that matter when there’s no food? He doesn’t know where his next meal is coming from, so he says: “I will get up and go to my father, and I will say to him, ‘Father, I have sinned against heaven and before you; I am no longer worthy to be called your son; treat me like one of your hired hands.’”

Is this boy sorry?

The Bible doesn’t come equipped with tone of voice, but even if it did, this kid could still be a good actor. I don’t know if he’s sorry. I only know he’s hungry. And when we’re hungry, we do whatever it takes. Right? And well we should. The wayward son has a plan that will get him some food. And this involves cutting his losses, walking all the way back to the old homestead, and … if I read him right … laying it on real thick.

I mean, maybe he’s sorry. My point is that he doesn’t need to be. In fact, I think the story makes much more sense if he isn’t. As a hired hand, he won’t owe the family anything. Once he saves up enough, he can get back out there where all the fun is.

So now he’s on the way home, and do you hear him? He’s rehearsing his speech. It has three parts, and he needs to say them in the right order. One: Father, I have sinned against heaven and before you. Two: I am no longer worthy to be called your son. Three: Treat me like one of your hired hands. Part three will seal the deal. How could his loving father refuse this show of penitence?

Here he comes now, up the long drive. He’s still far off. But he won’t get to the doorbell. Look: the father has been up on the widow’s walk, watching, hoping. The father knows it’s his son when he’s still barely a speck on the horizon. Thank you, God in heaven! Down the stairs he barrels now, nearly knocking two servants over. He races out the door and down the steps. Before the son can do anything, the old familiar smell of his dad is all around him—that musky, tobacco smell of his entire childhood. Daddy’s here. The gigantic hug, the kiss on the top of the head. Everything’s going to be OK.

One: Father, I have sinned against heaven and before you. Two: I am no longer worthy to be called your son.

Now, I figure one of two things happens here. Take your pick. It may be that before he can get to Three, the son’s words stick in his throat and the tears begin to flow. This may be when the son is finally sorry for what he has done.

The other thing that might happen here is that Three gets cut short. Dad isn’t even listening to the speech: “Quickly, bring out a robe—the best one—and put it on him; put a ring on his finger and sandals on his feet. And get the fatted calf and kill it, and let us eat and celebrate; for this son of mine was dead and is alive again; he was lost and is found!”

Wow, thinks the son in this case. I didn’t even have to do the part about becoming a hired hand. And if there’s one thing you know I like, it’s a party … in my honor!

Maybe the older brother knows it.

But let’s back up a bit. Let’s stick with the first possibility, that the son couldn’t finish his speech because he was overcome with regret. If that’s the case, it reminds me of one of my favorite songs by the band Mumford & Sons. The song is called “Roll Away Your Stone.” The first time I heard this lyric, it stopped me in my tracks:

God rolls back the disgrace. God’s solution to sin is simply to forgive it.

When the Hebrew people camped at Gilgal, they named it Gilgal because it sounds like the Hebrew verb “to roll.” The disgrace of the people was that they failed to trust in the God who made them and called them by name. And God just … rolled that disgrace away and opened up the Promised Land.

On that day, the manna stopped: the bread of angels given to the people because the people couldn’t grow their own food. Now they would have to do so. A fresh start means fresh work.

The psalmist says, “Great are the tribulations of the wicked; but mercy embraces those who trust in the Lord.” The psalmist contrasts the wicked with those who trust. I’ve never heard of trust being the opposite of wickedness, but you know, maybe there’s something to that!

Paul urges the Corinthians, “Be reconciled to God.” Prodigal son, be reconciled to your father. You came most of the distance just by being in need and being out of options. Now let your daddy wrap you up in a bear hug, because you are home. Embrace your welcome and feast royally today, and then wake up tomorrow to learn what your next work will be.

But wait. What about the other possibility, the one in which the son still isn’t sorry? The one the older brother fears and may well be right about? We really want this kid to be sorry, so much so that most people assume he comes home in the first place because he is sorry, not just hungry.

But we know that’s not what life is really like. We all know people who are never sorry, those narcissists who just keep taking, and who will tell any lie to feather their own nests. Oh, how we hate them! Just like the older brother does.

What happens to the younger son if he’s one of these types?

The exact same outcome. The father throws him a party. Because the father didn’t screen his son for repentance. He didn’t even know there would be a speech. He didn’t know anything but the joy of his baby boy shuffling back down the road.

When you come home after burning all your bridges, you might just be given a far warmer welcome than you deserve. And you know what? There’s nothing you can do to deserve it anyway.

We could go on to imagine what life would be like, alternately, for a son who is penitent and for a son who is still scheming and looking for a way out. We may wish for him to roll away his own stone. But today, take heart: there is party for him and for you and for everyone. And look also: at the end of the story, the father is pleading with the older brother, “Please! Come to the party, too! Your brother is home!”

At the end of the story, who is the most likely character to be standing outside the party in the outer darkness, gnashing his teeth in frustration?

Hey, big brother: roll away your stone. Or let someone do it for you.