The Second Day of Fall 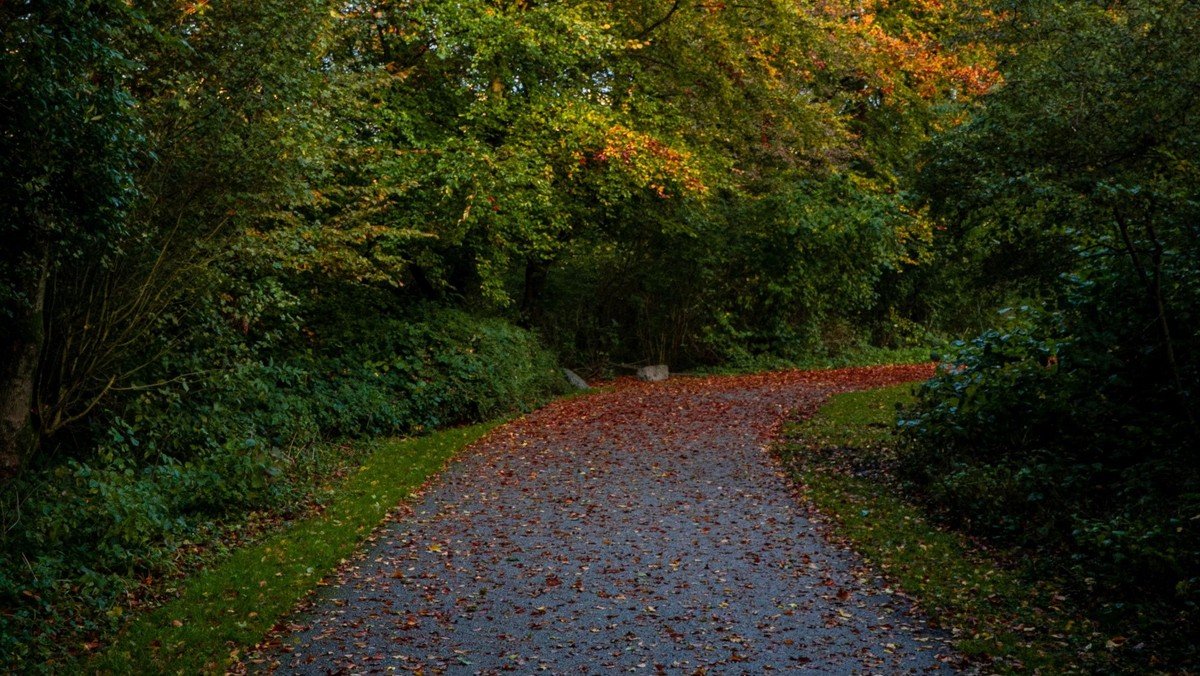 On the second day of fall at 5:45 a.m., the man was awakened by the sound of someone shouting and cursing, seemingly at random, outside his window. That wasn’t uncommon in this neighborhood. But now the man knew he wouldn’t be able to fall asleep again. The weather was still warm and dry enough that he’d left the skylight open overnight. He decided to go for a walk and get some coffee.

He pulled on some jeans and reached into the closet for his favorite purple sweatshirt. He put on the comfortable tennis shoes he usually saved for rainy weather, and also his Bluetooth headphones. It was about a mile to the nearest coffee shop, so he figured the lobby would be open by the time he got there.

The stars were beginning to fade, and Venus blinked in a friendly way on the western horizon. Lush ’70s harmonies washed into his ears, courtesy of Queen: “Is this the real life?/ Is this just fantasy?” The man walked the mile in peace, but as he got closer the neighborhood changed. The block nearest the coffee shop smelled like urine. A woman was sweeping up garbage under a streetlight. Although the man’s shadow fell across her path, she didn’t look up or acknowledge him in any way.

The man thought about the fact that he’d never been mugged. What would that be like? Would he just acquiesce to their demands, hand over his wallet? Wait. Was his phone locked? All his financial information was easily accessible there. He’d have to look into that.

The man arrived at the coffee shop to find that it wasn’t open yet. Oh yeah—it was Saturday. Most places would open an hour later than on weekdays. Instead of giving up and going home to make his own coffee, he decided to walk deeper into town to the next coffee shop, which was part of a larger chain and had probably opened at 6:00.

The sky was turning bluer. He counted four decrepit RVs parked near the Salvation Army. He passed a storefront with a tent in its entryway, and then another. Next he passed a frayed, defeated-looking old woman who had arranged a pile of her belongings on the sidewalk and was alternately surveying them and gesticulating wildly. He looked away from her ravaged face, but she didn’t seem to notice him. Or maybe she did and said something?—he wasn’t sure, because he had his headphones on.

The man made a wide berth around her and kept going. He passed a newsstand and caught some of the headlines: “Fed’s Efforts to Curb Inflation Risk Recession.” “Special Master Demands Evidence of Declassification.” “Teachers Leaving Their Profession in Droves.” “Church Welcomes Asylum Seekers Deceived by Florida Governor.” “Russian Reservists Flee to Georgia on Bikes.” “Here’s a List of Election Deniers Running for Secretary of State.” Well, at least it was nice to see less about the pandemic these days.

The man arrived at the coffee shop to find that its lobby wouldn’t open until 7:00 due to a worker shortage. The drive-thru was open, but walk-ups were not allowed. Time to go home? No, he was really craving that coffee and a snack. There was nothing for it now but to cut a hypotenuse through another neighborhood to a shopping area where most certainly he would find a place open.

Turning around, he crossed the street to avoid the tents and the RVs and then struck out more or less diagonally. He hadn’t visited this other neighborhood in a while. He passed the house of some friends he always intended to see more often than he did. He wondered how they were doing and why he never called them. He realized that the pandemic had changed the way he did things. Now he was always either too busy or just not in the mood to socialize.

Sure enough, here he found a third coffee shop that had opened at 6:00. He used to love to come and sit here with a book before the pandemic, but they hadn’t restored indoor seating. He ordered a sausage, egg and cheese biscuit and a tall mocha with whip. Then, just because, had threw in an iced lemon loaf. Why not? Celebrate Saturday.

He asked the barista whether they planned at least to put tables outside the shop again. She said in a grumpy way, “No, we’re a grab-and-go model.” Clearly she hadn’t worked there long enough to remember the way it used to be. And clearly it was too early in the morning for her to want to deal with extra conversation.

Food and drink in hand, he made his way outside and found a not-too-comfortable bench to sit on. But the mocha was creamy and delectable. The fatty sausage biscuit was salty and sumptuous. And the lemon loaf was awash in sugar and nostalgia. He’d earned it with all this walking.

A van pulled up, and a woman got out. The man smiled and said hi to her. She went into the coffee shop and came out again carrying a large number of drinks. The sour-faced barista had come out as well, also carrying drinks, and helped her arrange everything into the van before returning to the shop. The woman looked over at the man, chuckled, and said, “Wow, she was grumpy! I just couldn’t carry it all myself. You’d think they’d be a little more cheerful about helping their customers.”

“What are all the drinks for?” the man asked.

“A meeting at my church. We want to launch a new effort to help the homeless in our neighborhood.”

After wishing the woman well, he finished his breakfast and tossed the garbage in the nearest can. As he made his way back home, he realized that he himself didn’t feel grumpy. He felt content—at ease. Life was hard for many other people, but his wasn’t so bad. His family was happy, more or less, and he enjoyed his job.

He decided to cut through a park where his kids used to enjoy the playground. He came over the rise, and as he walked past the swings, he saw many people just hanging around—mostly older men in shabby clothes.

But one figure stood out, and as she walked toward him, he recognized her. She was the younger daughter of the friends whose house he had passed a while back. She was about 13. What was she doing all alone at the playground at 7:00 a.m.? She didn’t look too good, either. It had been a while since he’d seen her, and she’d grown a lot, but he knew it was her. She just looked … frayed. Disheveled. Not unlike the old woman with her belongings all over the sidewalk.

He called out her name. She recognized him, but barely. She looked dazed. He asked how she was, and of course she said she was fine. There was an awkward moment, and then he wished her well and headed for home.

On the way, he thought about the girl and worried about her. It wasn’t his business, though, and he rarely saw these friends anymore. Did he have a right to worry so much? He almost put her completely out of his mind.

Then, out of nowhere, something shifted in him. He pulled out his phone and texted the girl’s parents: “Hey, you guys, I just wanted to let you know I ran into your daughter in the park just now. It’s barely light out, she was all alone, and this isn’t the safest neighborhood. Is she OK?”

He arrived at home. His family was still asleep. He kicked off his shoes and reclined on the couch just as a reply to his text arrived. “Thank you for telling us. She hasn’t been sleeping well, and sometimes she gets up before the rest of us and goes for walks without telling anyone. We’ve been worried about her, too. The pandemic was especially hard on her—all the isolation, and doing school on the computer just didn’t work for her. We’re trying to find her a therapist, but everyone’s filled up, so we’re on a waiting list, and it’s months long.”

“I’m sorry to hear that,” he wrote back. “What about your older daughter? How is she?”

“Oh, she’s handled it much better. Actually, she’s just been cast in the school musical. They’re doing Hadestown later this fall. Want to come see it?”

“Yeah, sure,” he replied. “Message me the details.”

He hung up his purple sweatshirt and headed for the bathroom. He took a hot shower, reveling in the steam and the smell of his favorite shampoo, the one he’d bought specifically for the scent. He got dressed, but it was still early to be up on a Saturday. He settled into the couch more deeply; he might doze a bit before anything else happened today. He put on his Bluetooth headphones again. Now George Michael was singing:

The rich declare themselves poor/ And most of us are not sure if we have too much/ But I’ll take my chances/ ’Cause God’s stopped keeping score.

As he relaxed, he thought how good it was that it was Saturday and that he had no plans. Again he thought of the weirdness of this chance exchange with old friends. He’d politely accepted the invitation to their other kid’s show, but it wasn’t like he knew the family all that well. When the time came, he probably wouldn’t go after all. Besides, what was with that foreboding title, Hadestown? It didn’t sound very cheerful.

Then he realized he was too warm from getting dressed right out of the shower, and he was thirsty, too. But he had already settled so comfortably into the couch. Should he get up and quench his thirst, or should he sink back into slumber?